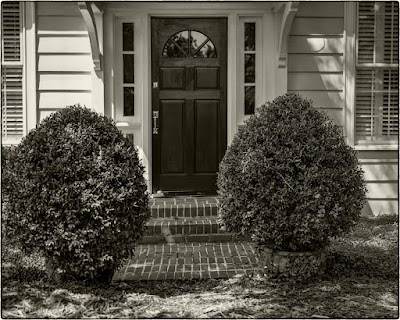 The weekend is done, and I have not left the house but to go to the grocery store and to my mother's house.  The cat, with her gruesome wound, has not shown up again to eat.  I saw an armadillo walk across my deck in the early morning light.  Other people are back to their general work weeks, the kids back in school.  There was that old, familiar feeling of a Sunday night.  Everything was quiet.  I, however, will not be returning to the factory.  My life will go on as the hum it has become.

That is not to say I have done nothing.  I didn't merely sit in a chair and contemplate the endless hum.  No.  I got my camera and film holders and various chemicals and put myself to work.  Many, many glass plates, X-Ray films, and just plain old regular film, all souped in one of four special chemical concoctions--just to see.  Three, actually.  I used one standard "soup" just for comparison.  I wanted those photos to be the standard so that I could see if my exposures were right, otherwise I wouldn't know if it was me or the chemicals.  This photo is the only one of the lot that I would show.  I won't say "failures all around" because I learned something.  I've eliminated a lot of film and chemical combos.  I also learned that I was finished with experiments for awhile.  All those hours yesterday yielded me nothing but this stupid test photo that I can do nothing with but post here to illustrate the idiocy of the day.

What I came away with was this: if I don't start making photos of people with the big cameras, I'm a cowardly failure.  I know what I want to/need to do.  I now have the big camera skills to do it.  I know how to work the camera front and back.  I know which developers I will use and which films.  Now it is just a matter of cojones.

So there it is.  I'm just putting it out there.

Crazy as it sounds, while souping film, I was also making soup.  Stew, actually, the seafood type.  Because I was timing a long development experiment, I know that it took me twenty minutes to chop four carrots, four sticks of celery, two potatoes, one white onion, a bunch of fresh parsley, and a quarter head of garlic.  Salt, pepper, red pepper flakes, and some Old Bay seasoning.  A quart of chicken stock.  Half a bottle of white wine.  A giant can of crushed tomatoes.  One tablespoon of tomato paste.  Eight ounces of clam juice.  Then hours of stewing.

Hanging negatives, cleaning up the all the trays and measuring cups and funnels in the garage.

Then, just before going to mother's, cod, shrimp, and scallops.

I sat down with a glass of wine to unwind, the first sitting I had done all day.  Yea. . . so don't get the idea I just sat in a hideous slouch.

The house was filled with music.

The stew turned out well.  A baguette of sourdough French bread and a bottle of Vouvray completed the meal.  We might have been eating on the outside deck of a waterfront restaurant in San Francisco.

Except for the heat.

Back home that night, I had a mess to clean up and a bunch of film to scan.  It was nine when I finally poured a drink and collapsed.

But wait.  My memory fails me.  Of course I went out on Saturday night.  The dog had dripped snot into my open mouth.  How could I forget that?  I suffered from some imaginary zoonotic disease for the rest of the weekend.

Perhaps science just hasn't discovered the transference of mental states yet.  Maybe the dog was depressed and somehow infected me.  Don't scoff.  The dog did seem depressed and by god there is so much that science has yet to discover.

I will try to kick it today.  A trip to the gym, some leftover seafood stew, and a walk around while I finish up some medium format and 35mm films.  Keep moving.  Get happy.

All I know is that that picture is awfully, terribly dumb.