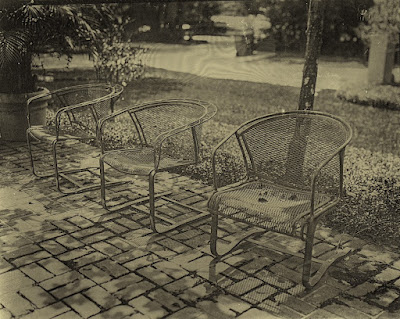 Behold--a new photographic form, the Xambrotype!  And guess who "invented" it?  That's right, your old pal, me.

That's a bold overstatement, though.  I invented nothing.  The film is an orthochromatic X-Ray film.  Didn't invent that. The developer was created by a guy in Australia.  What I did was put the two together.  Voila--the Xambrotype.

If the little swirly things on the photo are confusing you, that is because I was in a hurry to scan it and show it off, so I put the plate face down on the scanner glass and consequently got what are known as Newton Rings.  I need to put a piece of museum glass between the two.  But for now. . . .

But enough of this photography talk for nerds.

The feral cat has been hit and miss on coming around to eat.  Sometimes it is the rain, but other times she is just MIA.  Just before I went to my mother's house last night, she came to eat, so I got the chow bag and gave her some food.  She has gotten to be much more trusting of me and she stands at my feet as I fill her bowl.  When I straightened up and she went to the bowl, I saw a deep open wound on her backbone, about the size of a quarter and bright red.  Holy smokes, I didn't (and don't) know what to do.  I can't get close to her let alone pick her up and give her care.  Something nailed her, but it is hard to imagine what would have made such a wound down by her tail.  It looks like somebody hacked her with a garden hoe, but that surely isn't it.  It has to be a wound from some animal.  No wonder she is so crazy schizo.  She always looks like something is going to get her, and now I see she's right.

She is a wild animal and will not live as long as her domestic friends for sure.  Fleas, ticks, parasites, and predators, starvation. . . everything confronts her.  I hope that wound heals up o.k.  Somehow, wild animals do heal without medical care. A lot, anyway.  My fingers are crossed.  But man, it makes me sad.

After feeding the cat, I drove to my mother's house.  She didn't want to go outside.  She was at the end of a Bob Hope/Jane Russel movie.  I watched two commercials worth with her and told her as much fun as it was. . . I was leaving.  My replacement at the factory texted and said they were making Chicago beef or something and that if I could to stop by.

Dogs, cats, birds, kids, drinks.  It turns out I won't be returning to the factory any time soon.  He'd figured out his problem, he said.

While playing with the hound dog, snot ran out of its nose and fell right into my mouth.  Holy shit, holy shit. . . I'm sure to have the Monkey Pox now.  Something.  I'm paranoid as shit.  The dog had a runny nose.  That can't be healthy.

I await the malady with deep dread.

Back home, I poured a whiskey and fell asleep on the couch.  I woke early this morning with a heavy mind.  It had taken some dark turn in the night.  All thoughts led to disaster.  I had to get up and shake it.

I don't feel as if I've shaken it, though.  I feel a deep despondency settling in.  I will isolate myself as if it is a contagious disease.  I will make tea and read.  I don't know.  My nerves will be jangled and tingle with indecision.  I'll alternate between involuntary movements and catatonia.

I guess I'll check my horoscope.  I'll call Madame Sosostris and get a complete reading.

After years of quarantining, being around people makes me feel even more isolated than before.  Surely the Times will have an article explaining this "phenomenon" soon.

Remember I told you that I had gotten rid of the two possums living under my house?  I told you, right?  As I make this blog post, an armadillo has just walked across the deck toward the "entrance" under my house.  It seems I can't win this battle.

Who has written this curse?  And why?

Still, the good news is, I'll be remembered in the annals of photographic history as the man who first made Xambrotypes.  There is that.

Since I was using my 4x5 camera on a tripod, I shot four exact images that were treated in different ways. Here is a piece of X-Ray film I developed as a traditional negative.  There is real potential here.  Maybe I'll make some "real" pictures soon. 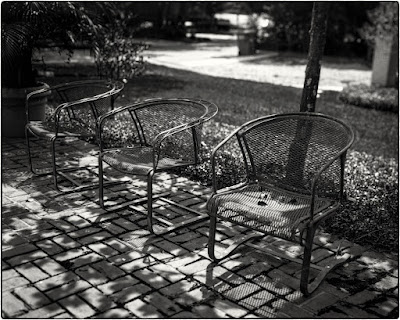