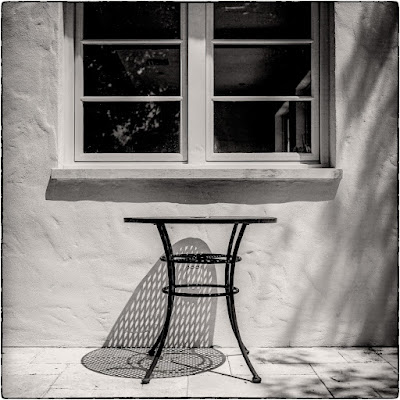 I just started to write a little story here that was made up.  I quit soon enough.  Writing fiction is much harder than just lying.  I thought through two stories yesterday.  I know what happens and have them mapped out down to much of the dialogue.  Trying to craft them, however, would take more time than I can give this morning.  Narrating something that happened is much, much easier, the language more natural, the ending pat.  Writing is a practice.  Fiction writing takes a lot of practice.  People who write novels are generally just insane.

I will write those little stories I have in my head. . . just not here and now.  You know what they say--there is nothing that can't be done. . . tomorrow.

This photograph is bolder than it looks.  It seems simply a serene image of shape, texture, light, and shadow.  It illustrates, I think, the meaning of the word photography--writing with light.  There is no tension in the image.  It is akin to what Edward Hopper said he really wanted to do which was to paint the light he saw on the barns of New England.

So what makes this photograph bold?  I trespassed to take it.  I guess it was trespassing.  I had taken my Mamiya 6, a medium format camera, on my walk with me.  Walking to the lake from my house, I saw this.  The fellow who owns it is rarely around.  He has been a CEO of several major corporations and has houses elsewhere.  He bought up four homes around him, tore one down to build a swimming pool and another one down simply to have more lawn.  That house was the former speak easy, they say, where Al Capone used to come to gamble back "in the day."  Not long ago, they discovered an underground tunnel that went from the house to the house across the street.  But the speak easy is gone now.   He converted the house that was next to it into a beautiful villa for business meetings and the like.  As you can see in the photograph, he had  it stuccoed to match the Italianate villa he built above the lake.  The entire property, I'd say, is photographable.  So that day, walking by and viewing that table and the lovely sunlight, I said screw it and walked across the property to take the photograph.  That's trespassing, right?  Oh, man. . . I'm a real criminal for photography, a danger seeker akin to the bravest of war correspondents.

I'll admit to having trespassed twice that day.

I had taken my medium format camera because a roll of medium format film has only twelve exposures.  I had ordered six medium format rolls of the same film stock I've been so thrilled with shooting in the 4x5 cameras.  I was in a hurry to expose a roll and develop it in the new developer I've just started using.  That developer is problematic.  It comes in a brown bottle and is a syrup.  It is formulated with a stain that helps smooth out transitions between light and dark and brings more life to the shadows.  So they say.  I've used it twice.  Any little drop of the developer, even after mixing with water, stains whatever it touches a reddish brown.  Thank goodness it washes off the ceramic sink in the kitchen, but I didn't have that luck with the resurfaced sink in the bathroom.  There the stain remains.

Another problem with that developer, however,  is me.  My math brain went sideways when I was calculating how much developer to use in 500 ml. of water mixed 150:1.  The last two rolls I developed, I realized just yesterday, had FAR too much syrup.  I've been overdeveloping the negatives by half, and there have been some residual effects in doing so.  Today, though--oo-la-la--I will shoot some more film and process it correctly.  The negatives should be even lovelier than before.

To wit--I'm ready to trespass again depending on what I see.  I'm courting a real life narrative about my my coming run-in with Johnny Law.  As I say, it is easier than making stories up.  Whenever I go out and get into trouble, the writing here improves.  I have no difficulty telling such a tale.

I think this may have been the only decent photograph from that lawless roll.  That probably won't keep me from posting some of the others--depending on how desperate I become.

I do find this photograph appealing in its simplicity, though.

This is a bit of a bromide to yesterday's posting which was terribly negative (but accurate).  Last night, I woke up thinking that "the fire" will come not from nature, but from science.  Frost's fire and ice are emotional states, but in 1920 when it was published, Frost had yet to see Nagasaki and Hiroshima.  Fire, not ice.

Oh, why did I have to end with that?  Let's not.  It is the weekend.  I may have volunteered to do some temporary duty back at the factory.  I told my replacement who was confiding some "issues" he was having that I have an itch I'm not sure I should scratch.  This temporary assignment would be just the thing.  Then I, too, would have "real" weekends for awhile.  After a lifetime of working, though, I have not broken the work week/weekend rhythm, and I still feel the significance.  I have strong memories of Friday nights, Saturday afternoons, and glorious Sunday mornings.  They each have a great emotional aura attached to them.  And so. . . let's end with something beautiful, a weekend song, I think, that kind of sums up Friday night cocktails, Saturday afternoon Camparis, and Sunday brunch mimosas and Bloody Mary's.  It does that for me, anyway.