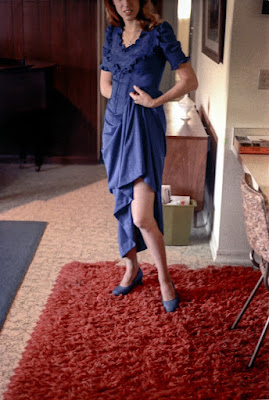 In conversation with my mother one afternoon, I remembered that dad always had a thick billfold that he would often refer to as his pocketbook.  When I was a kid, of course, references to pocketbooks were usually aimed at women's handbags, so I always thought it quite funny.  Perhaps there was, however, a generation or social group that referred to men's wallets as such.  I looked it up.  Definition 2: "a flat typically leather folding case for money or personal papers that can be carried in a pocket or handbag."

Indeed, my father had been accurate.

When my father died, I had to clean out his house and go through his possessions.  It is a terrible thing, I assure you, and not something one would relish.  For the most part, I looked briefly at papers and objects and put them either into boxes or the garbage.  In the end, there were very few things I held onto.  There really wasn't much in the first place.

My father's "pocketbook" is in a box in my closet with some of his papers.  After talking with my mother, I got curious to look and see what was in there.

"It's funny," I said to my mother, "how what we carry with us has changed.  Dad always had that thick wallet in his hip pocket.  I don't know how he sat on it.  What did people keep in them?  A driver's license, of course.  A social security card.  Union cards, credit cards, and pictures.  People always had pictures in their wallets."

Now, everything is on your phone.  The pocketbook has been transformed.

Yesterday, I pulled the box from the closet, set it on the bed, and opened it.  There on top of a stack of papers it sat, big, black, now hardened and cracked with age filled with a sundry of things, papers with cryptic numbers, doctor's appointments, a Sears and a Montgomery Ward charge cards.  A membership card to get free coffee at McDonalds.  A receipt for two books he'd ordered from Walden's Bookstore.  And, of course, the official documents, a driver's license and  his SS card.  Inside the thick sheaf of plastic sleeves there were two photos--one of my mother on their honeymoon and one of my girlfriend.  Odd, I thought.  Of course, per usual, there was no photo of me.  It struck me as odd, however, that my father, who took photos his whole life, rarely photographed me.  I wondered at that.

Beside the wallet, there were my father's dog tags from WWII, a pocket knife which he always carried, and a cheap Timex watch which he always wore.  These were all touchstones from my childhood.

One of the papers was a list of my father's assets when he died drawn up by an attorney I had hired to help me through all these things.  There was not so much there--a couple bank accounts, personal items, and 45 shares of General Dynamics stock.  I read that with a shock.  I don't remember having ever done anything with those stocks.  I hadn't cashed them.  But there were no stock certificates.  My father had worked for General Dynamics in the 1960s and '70s.  Where would those stocks be now--42 years later.

I went to the computer to see if General Dynamics was still a company, and sure as shittin' they were.  So I looked up the value of their stock.  Those 45 shares which were worth $2,000 in 1980 were worth over $10,000 today.  And in those 40 years, how many times had the stock split?  Crazy.  What, I wondered, ever happened to that stock.

I Googled the question and got a lot of helpful hints--if I had the certificates.  But how could I track those stocks down?

I wrote a couple text messages to people I thought might on an outside chance be able to tell me where to start, but as I thought, their ideas were like mine.  Oh. . . this was when I missed my personal attorney.  She would dig into it.  Her father did estate law in addition to his other practice.  He would probably have an answer.  But piss shit fuck goddamn, she has written me out of her existence.  We are not pals any more, I guess.

No, that is not a guess.

I decided to go to the General Dynamics website.  I found some contact information and called the help line for retirees.  I explained my situation to a very nice fellow on the phone and gave him all my father's info.  He looked him up by his social security number and said there was nothing in the database for him.  He said, however, that the account might have been transferred to another financial institution over the years, but he would have to get a supervisor to help him.

After a few seconds, however, I was back to the main menu.  I called back and got another fellow.  He took me down the same path.  Nice enough, but no help.

I thought about it for awhile and decided that was probably not the right people to call.  My father had not retired from that company.  I went to the states unclaimed property website and put in my father's information.

I was stymied.  Maybe I would never find them.  What happens to the stock of a dead man?  Then I thought that maybe somehow he had put my mother's name on them when they were still married.  I decided to call the state unclaimed property number.

"This is going to seem a really strange question," I said to the lady who answered.

She checked, but there was nothing.

Hours had passed with me feeling a strange combo of nostalgia and greed.  What would I do with the money if I got it?  A new large format printer?  A Hasselblad 907 X?  I could spend a lot of it on hiring a house repairman.  If the stock had split once, it would be worth more than $20,000.  If twice. . . god, I truly don't know how these things work.

I went back to my bedroom to put all the papers and paraphernalia back in the box.  That's when I saw an envelope with a roll of 35mm color negatives in it.  Hmm.  I cleaned them off the best I could and put them into the scanner.  There were sunset pictures. 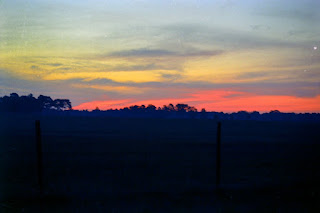 And there was a picture of a fellow standing far away in the yard.  Was that me?  After scanning, I enlarged that portion of the photo.  Nope.  Not me.  It was my friend and dive buddy Tommy.  When did he come to my father's house.  We lived in a dump.  It was horrible, and I didn't bring anybody there.  It seemed surreal.  Tommy's father was a doctor and they lived in a big house in a nicer neighborhood.  Had I really had him over? 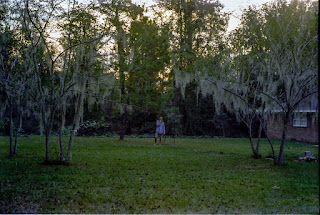 Why would my father be taking photos of Tommy, I wondered?  This was another of the "mysteries of the box."

The final shocker was the photo at the top of the post.  That was my girlfriend.  There were two photos of her.  Again, this photo is a complete mystery to me.  Where in the hell was this picture taken?  I don't recognize those weird rugs, the floor, the furniture. . . not any of it.  Why was she wearing that dress?  And why in fuck's sake was she showing my father her leg?

The whole day had turned weird.  Good old pop.  The apple truly doesn't fall far from the tree, eh? But I was feeling that I had somehow been absent for part of my life.  Memory is murky, sure, but I was remembering nothing, not about the stocks, not about my dive buddy, not about my girlfriend.

Hours had passed, and I was worn out with emotion and greed.  Why did dad not like to take my photograph?  Why did he carry those pictures of my mother and my girlfriend?  And where in the fuck was the money?

I've been sitting here contemplating a meaningful ending to this post, but I am drawing blanks.  Perhaps the mysteries are too strange for an ending.  I don't know.  I guess I can simply say beware of opening a dead man's chest.