"It Has Been Good for You" 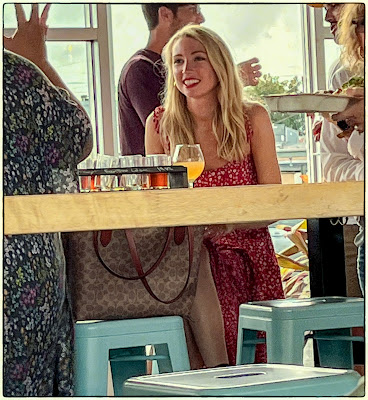 I went out again last night to meet my Cali buddy for dinner and beers.  My mother says I look better since he's been in town.  "It's good for you to get out with friends," she said.  Dancing Larry was there as was another friend, my buddy's best friend all through elementary school and high school.  He was the class valedictorian and is now a surgeon.  He was the fellow I usually covered in our Saturday afternoon basketball games.  I've known him now for many years.

The surgeon had picked out the place we met, some food truck craft beer bar on a street between the back of a large shopping mall and an industrial area.  WTF!? I thought.  There was no a.c.  It was hot and sticky, but these were all southern boys to the core.  I was sweating like a drunken pig.  But whatever.  I drank the lousy brew pub local swill and ate a dry falafel sandwich off one of the trucks.

Despite everything I have just said, however, there was a large Monday night crowd.

I did not take the picture.  I just saw the girl when she walked in and all but fell over.

"She's just your kind," my buddy said to me.  Absolutely right.  "She looks like every girl you've ever dated."  There were many elements of truth in that sentence.  I could do nothing, however, but tremble and shiver.

My tenant had sent me an article earlier about a 2015 trial of a photographer who was being sued by a couple whose image he used in a display for an upcoming gallery show in NYC (link).  The show was of photographs he had taken through apartment windows in New York City.  My ex-wife's father had several apartments in NYC, so I used to go all the time.  In every one of them, the evening entertainment was looking out the window at all the other windows across the courtyard.  People left the curtains open to the world, and by god, you'd see almost everything you could imagine.  And of course, there was always somebody watching you back.  The photographer being sued said he was inspired when he saw Hitchcock's "Rear Window."  Yea.  Weren't we all.  So I Googled the artist and looked at the imagery.  It was pretty.  None of the images were lurid.  And if I were to criticize his work, it would be that his discretion was his weakness.  Everybody likes to see behind the curtain.  What we get from him is a bunch of painterly images.

He won the case.

I understand, of course, the fear of being photographed in an unflattering (or worse) way.  On the other hand, we are all being photographed all the time now, whether by someone with a camera, an iPhone, or by surveillance cameras at every gas station, minimart, red light, or crosswalk.  At the factory, they had "security" cameras in all the hidden places, and I am dead certain I was watched "adjusting" myself in some random stairwell.

But these are the images that will be our historical markers.  This is how we will know who we were, or how your children will judge who we were when we're dead.  Photography shaped our knowledge and values of the 20th century.

My buddy took that picture and sent it to my phone.  He told the table the story of the drum circle and the Sufi dancers last Monday night.  The surgeon, of course, wanted to know if we talked to the pretty dancers, and I said, "He did," with a jerk of the thumb, so my buddy told the pathetic story.  He was talking to one of the girls and she asked him to introduce me.  He did, but I had no idea that she had asked.  I thought this was another of my pal's outrageous attempts to. . . I don't know, but he does shit like this all the time.

"And there was C.S. looking at her like he was a mummy.  He was all polite and could barely talk.  He's shy.  He clams up like he's deaf and dumb."

It's true.  I felt like a stroke victim standing before her.

Having been out and about this last week, however, I realize that it has gotten worse.  I have lost all vestiges of confidence.  I feel like Quasimodo.

And now boys scare me.  I can't roughhouse with them any more.  My physicality has always been a big part of my self image and self worth.  It is a horrible confession, sure, but worse, I now know I should have gone for the money.  I was sitting with the fellows who had the money, and I know that it makes them happy.

Now, that picture. . . .  She sure looked happy and confident.  But you never know about such things, do you?  She very well may not have been either.  And god knows what time and circumstance will serve her.  But for the moment, she was an icon.  The photo is not of a particular person but of a figure in a moment.  There is nothing unflattering about the photo; indeed, it is very flattering.  But even if it wasn't. . . well, a photograph is never of a real human being any more than those fabulous Greek statues are.

"I'm not like you guys," I said.  "I am shy around women I'm attracted to.  But it is because I want too much.  I don't want the flesh and blood, you know. . . I want their souls.  I want to be admired and adored.  I want to live in the hearts and minds of women everywhere!"

My buddy and the surgeon are both married with children, and Dancing Larry has given up on the idea long ago.  And so, after the mediocre beers and the less than sterling food, I was tired and sweaty and wanted to be home.  They were talking about the next bar when I said I was out.  I've had a lot of stimulation this past week.  It has probably, as my mother observed, been good for me.  But I have become like one of those orphan babies that have been left alone in a crib too long and can no longer take much stimulation.  Or maybe it was just age.  I was tired.  I left with promises of future meetings.

When I got home, I poured a whiskey and sat in my usual spot.  I put my feet up and closed my eyes and let past images flicker across the back of my eyelids.  As Cormac McCarthy so eloquently noted, this is no country for old men.