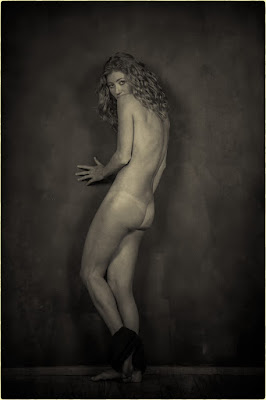 An anonymous comment made about yesterday's post called it redundant.  Well now.  There are two ingredients involved in that, I assume.  One is that old people tend to start repeating themselves, right?  Why is that?  Perhaps everything has already happened to them except the really bad stuff.  The other is--you try writing every day for twenty years and see if you can never say the same thing twice.  Motherfucker.

I'm going to repeat myself in pictures, too.  Same old shit with a different treatment.  Turn around kid, and show us your pecker.

You never know.  It's a new world, kiddo.  They, however, have said they'd be our correspondent at Burning Man this week.  They have shown me their costume.  They are excited.  It will certainly be a mystical experience equal to Jesus' temptation in the desert.  Beelzebub is licking his lips.  Incubi and succubi will be there in abundance.  Asmodeus will set loose the Behemoths and Leviathans.

It's sure to be fun.

Which of your favorite celebrities do you think will be camping out there?  Which?  I may be wrong, but I think they went to Coachella instead.  That was the demons' pre-season.  Black Rock is the World Series.

I kid.  I wish I was there camping next to Bill Murray or Wes Anderson.  It would be fun.  The celebration has grown from around ten participants its initial year to more than 80,000.  That's big.  I wonder if it is still commercial free?  I'd go and take photos, but I'm not in shape for it anymore.  I will have to stay close to home and engage in my own ayahuasca retreat.

But we will take part remotely thanks to them.  It should be o.k.  They know how to handle their drugs.

Remember my Demi Lovato post?  Turns out its a singer.  She has a new album.  Huh.  But there was another name that was confusing me as well.  Harry Stiles.  He's a singer, too.  I listened to songs from each of them.  Holy smokes!  Really?

But Harry Stiles is in Woke trouble for appropriating things gay.  Appropriation is bad.  That's what they say, though I haven't heard much blowback about drag queens.  I think Ru Paul is still a thing.  I guess they will eventually get to that.  You can't do it all at once.  You just have to be methodical and go down the checklist.

But I don't care.  They can have their Harry Stiles.  There is one thing I like about him, though.  Who in the hell names their kid "Harry" these days?  What a throwback.  You got to love that.

I'm sure I've said most of this before somewhere in one form or another.  What can I tell you?  The most exciting thing that happened for me yesterday was making tacos for my mother.  I hadn't made tacos since things went south years ago.  Oh me oh my oh they were delicious.

Me oh my oh?  Yea, I'm going to leave you with this from the OG of country western.

Until the pics start rolling in.