What Shall I Wear Today 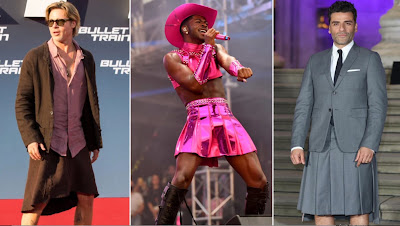 I hope I don't get in trouble for using this image.  I took it from a story in The NY Times.  But hell, they steal my ideas all the time, so maybe it's o.k.

I'm going to riff today about "choice" as I suggested at the end of yesterday's post.  Too big a topic, of course, but what the hell.  Let's see.

Camus said it.  The biggest philosophical choice is whether life is worth living.  Or rather--suicide.  So far, we know how you have chosen.  You've decided that it is.  Suicide rates are increasing in the U.S., but we've covered this territory before.  Men over 65 are the most likely to.

But I don't intend to get heavy here.  Let's just be stupid for a bit.  The newest fashion trend is Men in Skirts.  Now guys, I'm wondering. . . would you wear one?  I don't have any problem with it, of course.  Free the Balls.  Let My Boys Breathe.  I used to have a good set of wheels, so I probably would have leaned toward the mini of L'il Naz (or whatever his name is), but I don't wear underwear so there would have been some indecent moments, I'm sure.  Now, of course, I'd be more likely to favor the mumu.  I can't imagine anything more comfortable.

So yea, I'm cool with it (though I think these guys look like they need a set of bagpipes as accessories).  I can be cool with it and still make fun of it, though, right?  I mean, I can afford people the right without having to like it.  And that is where the rub comes in.  Today's, anyway.  Because a skirt isn't just a skirt, is it?  I mean, it is packed with semiotic meaning.  Nothing is "simply" or "just" anything.  In this case, there is a deep ideological argument at play.

On one side, for instance, there are those who see this as just another Woke attempt at feminizing men.  On another, it is a badge of rebellious freedom.  One side will characterize men in skirts as a bunch of homo faggots.  The other will see them as ultra hip and ultra cool.  Many of those same people, though, would criticize someone wearing a camouflage hunting cap or ridicule someone who wants to wear a safari jacket.

So then we get into the shit.  Why are some choices better than others?

It makes me want to wear a skirt with a safari jacket and a hunter's cap.  Know what I mean?

CNN was very happy about a contestant in the Miss England competition who is the first candidate not to wear makeup.  How about that?  Sure, we all know that women who wear makeup are shallow and fake, right?

How about if Brad Pitt does it?  What if he shows off his newest eye shadow in his brand new sexy silk panties?  Oh, man. . . wouldn't that be something?  TikTok would blow up with videos about applying man makeup.

Man makeup?  Why am I so binary?

As a hippy, I used to hate the whole Wall Street suit and tie look.  Men in their grey flannel suits and all that.  One day, though, it occurred to me how much those suits simplified life.  You didn't have to get up in the morning and spend time wondering, "What should I wear?"  You just put on the uniform.  There are enough choices to make in a day, I thought.  One fewer might be nice.

I don't mind any of it anymore.  It's all good.  I'm really a Lenny Bruce on such things.  Say it or do it long enough, and it doesn't mean anything anymore.  We must always remember that a cliche was a fresh and powerful idea. . . until everybody did it.

Know what I'm sayin' yo?

Personally, I'm worn out with making choices, even the simple ones.  That is why we develop routines, I guess.  It takes the guesswork out of things.  As my world shrinks, my routines take over.  Soon I will be just like the Rain Man.  Somehow, though, it is comforting.

It is something I choose, I guess.  No matter, you cannot eschew making choices.

"The trouble with most people is that they don't know what they want."  That's what my dead ex-friend Brando used to attribute to Faulkner.  I don't know if that was Faulkner or not, but I agree with the statement.  Know what you want and people will follow.  They love someone who is certain about their choices.

I lived by a philosophy for years that made me take full responsibility for everything that happened to me. If a gas line blew up and a manhole cover cut off my head, that was my choice.  I chose to be there just then.  If I had made other choices. . . yada, yada, yada.  When my own true love would abandon me, of course I took responsibility.  Ultimately, if I had chosen never to go out with that person in the first place. . . .

It went on and on.  I refused to be a victim.  I was the master of my destiny for good or ill.

One day at the factory, I was in a discussion of the Myth of Sisyphus with two Ph.D.s, one in philosophy and one in literature.  One of us said Sisyphus was the happiest man because he needn't make any choices.  He was destined to push that boulder up the hill forever.  Another of us said the opposite.  Unable to choose, he was the most despairing of men.  The third of us said that he could not avoid choosing, that he would have to decide how to accept his fate.  Would he love or hate his captor?

Which brings us back to Camus.  What makes life worth living?

For some, for awhile, it may be men in skirts.  That's the kind of stupid shit that distracts us from thinking about the real choices that face us.  As Eliot said, there will be time. . .

. . . for all the works and days of hands
That lift and drop a question on your plate;
Time for you and time for me,
And time yet for a hundred indecisions,
And for a hundred visions and revisions,
Before the taking of a toast and tea.

In the room the women come and go
Talking of Michelangelo.

And indeed there will be time
To wonder, “Do I dare?” and, “Do I dare?”
Time to turn back and descend the stair,
With a bald spot in the middle of my hair —
(They will say: “How his hair is growing thin!”)
My morning coat, my collar mounting firmly to the chin,
My necktie rich and modest, but asserted by a simple pin —
(They will say: “But how his arms and legs are thin!”)
Do I dare
Disturb the universe?
In a minute there is time
For decisions and revisions which a minute will reverse.
But of course, we know the popular version of T.S. Eliot.  It is what Andrew Lloyd Weber did to that.  Right?  "Cats"?  Turn that fucking shit into a pop shit musical for the masses.
Eliot was depressing.  Nobody's got time for that.
And so there I will end my daily silliness.  I mean, I have to choose to end somewhere, right.
I grow old ... I grow old ...
I shall wear the bottoms of my trousers rolled.

Shall I part my hair behind? Do I dare to eat a peach?
I shall wear white flannel trousers, and walk upon the beach. 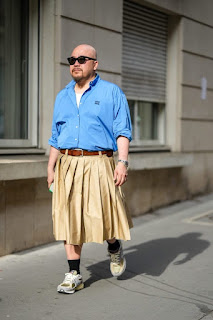