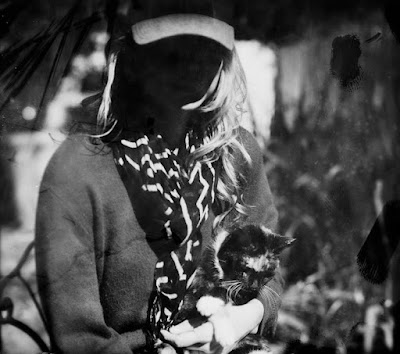 Boy oh boy oh, do I have a bunch of pictures I want to show you.  I've been working on really old pics from my studio days, the ones I shot with my first "real" digital camera, the old Nikon D700, which I thought was the bomb.  That "old" camera, though, only had 12 megapixels of resolution.  That's what your new iPhone camera has now.  I was shooting Polaroids almost exclusively at the time, but I would occasionally make a few snaps with the Nikon and a manual focus 50mm f1.4 lens.  I didn't use the strobes for this but shot under the modeling lights which means not much light at all.  As a result, I missed focus on just about three quarters of the images.  I don't know what I was thinking.  Getting the eyes in focus with that f-stop under those lights while jumping around like I was the photographer in "Blow Up" was incredibly hard.  As a result, I hardly ever worked on those digital images.

I spent all day yesterday doing that.  I was lazy and it was too hot to go out with cameras, then it was too hot to go out, then it rained.  Fine.  I called my mother in the afternoon and told her I was not coming over.  I had been sitting at the computer all day, had not bathed, and stunk to high heavens.  It was all true.  But I had been captivated.  I played music from my music library which I never, ever do now.  I usually put on my Apple Music to one of my stations and hear new and sometimes wonderful things.  I had forgotten how much good music I have in my library.  Sitting there, figuring out photo puzzles, trying to sequence my moves in the perfect order, then trying to replicate that in the next picture to get the same look while listening to music I played when I had the studio was mesmerizing.  The hours streamed by unnoticed.

Some of the things I got--I can only say "oo-la-la."  But it is good not to show them to you yet.  They will cool and some of them will not catch my eye in a few days the way they did yesterday.  Putting them in the drawer for awhile is a good idea.  It is always a good idea.

And I did all this without drinking.  I think that my "drink every other day" diet might have legs.  I didn't sit and lament that I was a dry drunk yesterday.  Rather, I thought that tomorrow (today) when I make navy bean soup for my mother, I can have some wine and a cocktail or two.  And I can see going two days at a time without drinking as long as that is not a rule.  Every other day drinking is about as much of a rule as I want.  Halving my drinking calories, I'll probably lose a quarter pound a month.  Whatever.  I'm fickle.  We'll see.

In the future, though, I think I will shoot with that old Nikon digital again.  The images have a nice quality.  They seem more "filmic."  Photography isn't about resolution.  Technology is nice, but you have to have a head about it.  I may be getting over some of my camera desires and envies.  I say that though I am still eyeing those medium format digital cameras.  But I am convincing myself to let them go.  Go minimal with digital and use the big cameras for film.

Or something of the sort.

What I need to be doing, though, is putting together a website.  That could take about a month of steady working days.  That's what I should be doing.

But what I proposed to write about today was the last season of "Better Call Saul."  Bob Odenkirk got a lot of praise for his work as Saul, but it was truly Rhea Sheehorn's depiction of Kim Wexler that made the show palatable.  You couldn't help but fall in love with her.  She was the girlfriend, then wife, that everybody wants.  She was the epitome of counsel and support.  O.K.  Sometimes she was a bit evil, but hey. . . the Devil isn't unattractive or he wouldn't be a problem now, would he.  No, people don't dream of marrying a Mennonite. There needs to be Wells's Touch of Evil in the mix.  That was Kim Wexler.

The craziest of crazy things is that Rhea Sheehorn appears to be nothing like the character she portrayed.  Not at all. Bagel.  Zip.  At least as she appears on late night talk shows, all chatty and giddy and silly.  How did they reign all of that in so that the Wexler character was so incredibly subtle?

Well, that's the actor's secret, I guess, though she was a comedian before getting the part on this show, and you know what they say about comedians.

So. . . I paid $25 so that I wouldn't have to watch the last season between commercials.  I got about twelve hours of show for that, about two dollars an hour.  I am poorer but better off for it.  I am completely convinced that television commercials are responsible for lowering the collective IQ of this nation.  I'll not be submitted.

So Ili and I watched "Better Call Saul" together, and we rather related to the relationship that was depicted there.  We weren't both attorneys, but one of us was, and a trial attorney, too, so there was that, and I always felt some sort of safety because of it.  I have watched her defend me with a veracity that was both frightening and endearing.  She was smart as well as pretty.  I mean. . . she was more than dangerous.

I was reminded of all that watching the final season alone in my darkened room.

But things go wrong, and the last two episodes killed me.  Spoiler alert!  If you haven't watched it yet, you might want to stop reading here.  Things get weird and people get killed and Kim leaves Jimmy.  They are broken by it, but she says that they are bad together, that they do bad things, and in a heart wrenching scene that will win her the Emmy, she breaks down on the ride to the airport (from which she departs to my own home state to work in a sprinkler factory--but that's another deal).

Jimmy never recovers.  Perhaps neither of them do.  Seven years later, though, when he falls on his sword for her and goes to prison for 86 years. . . well. . . I'll have to watch that ending again.  What is it she feels when she turns to go after visiting him in prison?  That's the freaking mystery.  That's the tell.

And that's the thing, ain't it?  What do you do in those big gaps, those extended silences in the midnight of the soul, wondering what someone might be thinking, feeling, a million miles away.

O.K.  Today I make navy bean soup and cornbread.  Not sure if I will make the cornbread.  I might buy some.  The key question is what do I pair with that?  I'm not sure.  Could a Pinot Noir work?  I think it might.

In all, I will have a busy Labor Day.  I need to make a schedule, make a plan.  I want to be productive again.  This lying about like a sack of shit is over.  I still have a couple more years to become immortal through fame.  I should be close, you know, but it is always that last little bit that is most difficult.

Oh. . . Burning Man finishes today, and I've not gotten a single report from our correspondent.  I don't know.  Maybe there is no cell service out there.  But then where are all those online images coming from? But what's up with "Burning Man"?  Isn't this 2022?  Who are these people supporting something like this?  Shouldn't it be "Burning Person"?