Hoping for Some Respite 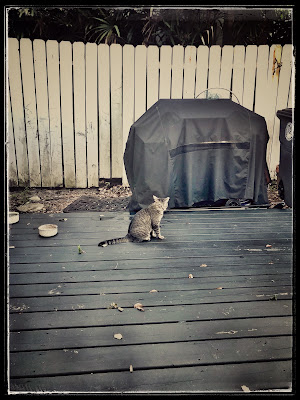 I took a picture, the first one in weeks.  I was documenting "The Return of the Cat."  She has only come once to be fed while I have been gripped by my somnambulistic depression/anxiety or whatever.  She looks o.k,  She must be eating elsewhere.  She talked a bit, then ate, then hung around while I had a cocktail on the deck.  When I went into the house, she walked up to the door with me.  She has only done that once before.  When I closed the door, she peered through the bottom panes at me.  It must be getting really dangerous for her out there.  The big male cats of the neighborhood come across my deck all the time now.  The neighbor's beautiful male cat does not come around.  There has been a change in the neighborhood dynamics, I guess, and these new males do not love the little feral.  There is no longer any affectionate gamboling on the deck.

After gazing into my kitchen for awhile, the little feral cat leaped upon the covered grill, then up to the fence railing and up the tree onto the neighbor's roof.  It is a weird thing to see.  I don't know if she spends the night up there of if she comes down.  What a strange kitty.  What a hard life.

My own, you ask?  Oh, you know.  Anxiety fills me. I still don't know how much the tree work and repairing a window in the apartment is going to cost.  Many thousands, but I don't know how many.  But that isn't enough.  Let's heap on a bit more.  Yesterday, the tenant told me the air conditioner was not working.  I went over to look at it.  I fiddled with some things, flipped some breakers and heard the outside compressor hum.  But it wasn't turning.  I took a stick and pushed the fan blades and they began to rotate.  I went up to the apartment and it was cooling.  Well, that was good but it wasn't.  I mean, something is wrong.  I didn't fix it.  I asked her to keep an eye on it and left.

Last night as I was brushing my teeth before going to bed, there was a knock at the door.  It was the tenant.  I went up and fooled around with the thermostat for a long, long time.  It has long and complex menus--far too many--and something seemed weird to me.  I couldn't get the thermostat to go below 74 degrees.  The fan would blow but there was no cold air.  After half an hour screwing with menus for "Home" and "Away" and setting schedules for different times of day, I felt some cool air.  I went out and saw that the compressor was turning.  I was very tired and hoped that it would keep her cool for the night.

I had nightmares all night long.  Weird ones, but somehow they always came back to the apartment.

To top it off, the meteorologists have me flipping out over something that has yet to become a hurricane.  Oh, it will, and we need to keep a careful eye on it.  Stock up.  Prepare.  Consequently, you can't buy a bottle of water.  This always confuses me, of course.  I just fill bottles and jugs up with water, but in all the years I've lived here, I've never had to use them.

It is not just water, of course.  Panic buying prevails and the massive mental disorder affects me.

I wrote to the factory group that "the Cone of Uncertainty comes directly over my house."

A friend wrote, "But you are live in the Cone of Uncertainty, don't you?"

Yesterday was a most beautiful day.  I didn't go out into it until it was time to see my mother.

My week of of uncertainty may be giving way to a week of absolute catatonia.  Once again, someone has put a hex on me, some horrible voodoo curse.

Or so it seems.  But I am trying to hold out hope.  Maybe Mr. Tree will give me a reasonable, friendly price.  Maybe the window repairman will return with good news.  Maybe the a.c. will be only a minor repair.  And maybe Hurricane Ian will not cause devastation in my own hometown.

As I watched the feral cat, I realized fear and anxiety and a broken heart and hope are all things she, too, experiences.  She probably knows about the hurricane, as well--you know, with her animal senses.

I am hoping for some respite.  I can't tell, though, if cats have hope, too. 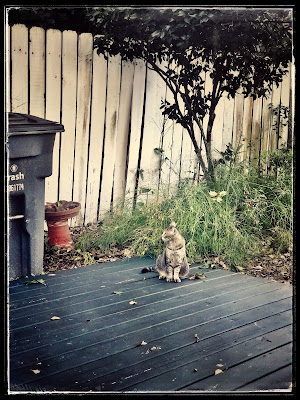