I Changed Today's Photo--Don't Be Confused 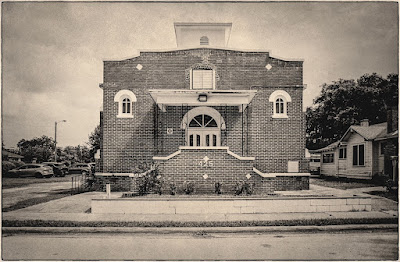 This is the silliest of pictures.  Sometimes I just shot stuff that the model wanted.  This makes no sense to me at all.  But now. . . I mean, it is really bizarre in a way, and I kinda weirdly like it.

And I have nothing recent to post.  And all I have to write is a report of yesterday's activities.  So.

My new best friend stopped by early yesterday morning.  With his crew.  They were walking around my property, he pointing, they looking.  Mr. Tree was preparing his tree trimmers.  I had not asked him for this.  We had never spoken of it.

"We're going to get started today."

Started?  Today?  Was he doing me, his only friend, a favor?  Was this going to be free?  I said nothing.  Maybe I said O.K.

The garbage men like me because I tip them at Christmas, I guess.

As I mentioned in yesterday's post, I've been in the valley of the shadow of death of late, in the lagoon between the descending mountains, and I felt myself sinking like the proverbial stone.  Well, not the stone that David killed Goliath with.  Just one dropped into a very deep lake.  The power tools were buzzing.  I was despairing.  I thought to go for a walk.

Walking, however, is very painful right now, so I decided to drive to a park with a half mile track surrounding an open field.  There is a little exercise park there.  Perhaps, I thought, if I had just a little exercise, nothing hard, just something to get the old blood flowing, I would feel better.  And if my knee got too painful, I wouldn't be far from the car.

So I stretched and walked a lap and did a few sit ups and knee bends and push ups and hanging rows.  Not many.  Then I'd walk again and do the same thing.  The sun was shining, the sky was blue.  After a couple miles of this, I thought that maybe it was working.  Maybe I was emerging from the gloom.

Not wanting to return home, I decided to go see my mother.  When I got to her house, a fellow was there to fix her garage door.  The exterior keypad was not working.  When I walked up, though, he was trying to tell my mother that she needed to replace the framework inside the garage as it was not up to code.  He said that he noticed that some of the boards were cracked.  I went over and saw that he was full of shit.  He was getting wide eyed now explaining things to me.  He said he could get a crew to knock the work out in a day.  I told him that was interesting and that what he should do is work up an estimate and email it to my mother.  Today, though, we just needed to get the keypad done.  He kept talking, telling us what he could do.  My mother looked at me.  I just nodded my head and sat down to make it clear that he should fix the keypad.

And here's the kicker.  I thought the thing was hard wired to the system, but I should have known better because it took batteries.  He lifted the cover, unscrewed one bolt, took the keypad off the wall and replaced it with another that took the same single bolt.  Done.  $85.00.

When he was gone, I told my mother he was full of shit and trying to scam her.  She knew, of course.  But I was pissed off at myself, I said.  I Googled garage door keypads.  $35.  I could have done it.

The city has changed the vendor who is handling their online payments and everyone in the city who pays online has to set up a new account.  My mother was going to drive to the utilities office to do this, but I said we should just do it online.  Bingabangabong. . . I had her set up in no time.  I was mom's Golden Boy that first day of autumn.  She said she'd treat me to Chic-fil-A.

When I got home, the tenant came over to complain about the dryer in the garage.  This reminded me that I had not heard back from the window repair guy who had cancelled on me the day before.  When she had finished, I texted the repair guy to see if he was coming.  He texted back.  He could be here in half an hour.  I had a fellow from Pella Windows come out to give me an estimate on replacing the window.  $3,500.00.  The window repairman said he could fix it, explained what he would do, then said he would have to sleep on it before he gave me an estimate.  He wasn't sure how long it would be before he could get to it.

Outside, as the day drew short, the tree guys were still walking around the property cutting and hauling things.

I went home, showered, and drove to the grocery store to get the evening's fixin's.  It was going to be a light meal, a tofu and mushroom stir fry with vegetables.  That Chic-fil-A had left me "heavy."

When I got home, I made a simple Margarita and turned on the six o'clock news.  The tree fellows were hanging around the truck waiting for Mr. Tree to come back.  I decided to cut the garlic and slice the tofu and mushrooms.  Oh, hell, I thought as I listened to Ari Melber opine, and I poured the oil in the pan to heat.  I dumped in the chopping for three minutes, removed them, and put in the stir fry veggies.  Three minutes later, I dumped the choppings back in and added the stir fry noodles.  I saw Mr. Tree through the kitchen window.  He was traveling the property and getting his fellows to do some last things.  I filled a deep bowl, added Teriyaki sauce and poured a glass of wine and went back to watch the news.  As I finished the first bowl and the first glass, I saw that Mr. Tree was finishing up.  What the heck, I thought.  I stepped outside.

"Do you want some dinner?"

"I have to go see another client right now.  Let me run do that and I'll come back."

Another client?  But I thought we were friends?!?

We sat outside on the deck with our meals.  He liked it, of course.  I'm a good cook and this was very tasty.

And then he was gone.  I said I'd see him tomorrow.  How much was today going to cost me, I wondered as I poured an after dinner scotch.  The window?  The trees?  I was sinking again. . . sinking.

I got a text message from the factory group.  They are having a union get-together at a bar for union members.  But they want me to come.  Apparently, they needed to have a head count or something, and wanted me to commit.  I thought about it for a minute and said I would go knowing that this was no more binding than making a pledge to donate to public radio.  This way, I had options.

It picked me up that they wanted me to come, ancient hero of the movement, beloved, etc.

The whole thing could be problematic, though, and I am in a quandary--about which I may be able to tell you later.  It could be juicy.

Darkness had descended and I was feeling conflicted.  I was momma's hero boy and a factory legend, but financial surprises lay ahead.  I decided to smoke some boo and watch t.v.  Then I smoked some more.  It really helps to slow the drinking, I thought.  It also put me to bed early.  By ten, I was down.

What fresh horrors lay ahead today?  Tomorrow?  Yesterday, I drove by a church with a big sign telling me that God loved me.  That made me laugh.  "It doesn't feel that way," I thought.  But who knows?  Maybe things will get better, eh?  I do think I have an easier life than most, lucky in some things and unlucky in others.  Love and Money have been problematic, and I have had most of the bones in my body broken now, but there is love and there is money and I am still, for the most part, ambulatory.

And it is autumn.  It is time to change the heavy quilted comforter from green to red (maroon) as has been my habit for the past twenty years.  It is a silly marking of the seasons, but I love those comforters.

By now, you are confused about the picture.  I decided to change it.  The photo I originally posted did not go well with the post.  Sorry you had to read this far to get clarity, but I didn't want to rewrite the beginning.  A picture of a church seemed much more apropos.