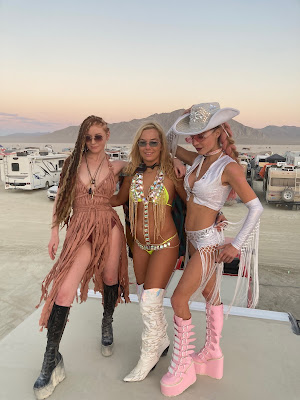 Our War Correspondent from Black Rock has finally emerged from the desert.  Thank God.  I've been worried that we had lost her, perhaps kidnapped by some dirt worshiping heathen.  She sent the initial updates last night.  Her first words:

"I did the burning man. And it was life changing. And I should be asleep."

There was more, but it was flattering and you would accuse me of making it up, so we'll leave that alone for awhile.   The words were accompanied by a video of her fumbling with an electric bike in that surreal landscape, dust storm brewing, she in some ecstasy of paralysis.

"Yes, I see the magical wisdom there.  Tell me how a festival with a bunch of fifty-somethings filled with mind-altering drugs and pretending it is Halloween in the middle of a hot summer desert changed your life.  I want to use it tomorrow on the blog—a special report from our culture correspondent!!!!"

It turns out that her revelation came not from a magical mystery trip ("😂 but oh yes, there was lots of acid. And lots of ketamine. And mushrooms. And cocaine. And alcohol. And clementines. And ramen"), but from the hostility of the desert and a paucity of concern and affection.  In the desert, she said, she learned self-reliance and self-love.

Our girl's survivor skills were put to the test, and she walked out of the desert victorious. 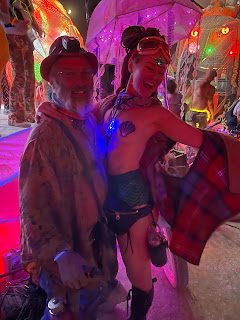 I was correct, however, or so it is reported, about the hoopleheaded ex-ravers trying to recapture their youth.  It only makes sense.  Burning Man costs money.  Our correspondent estimates she spent AT LEAST $4,000, before taxes.  It's an old story, of course.

"Oh the girls at burning man…. Most everyone is fit and beautiful. It’s rare you ever see anyone overweight," she reported.

It sounds much like the bars on the Boulevard in my own hometown.  Entrepreneurs and tech guys with loads of cash and pretty girls looking for a good time.  GenX meets GenZ.

I could not be a girl at Burning Man, I told her, being in the later phases of the Brando/Welles transformation.

This morning, curious as to why she is so late in reporting, I looked back to make sure I was correct.  Burning Man finished on September 5.  The rest of what I found, however, was enlightening.  Reportedly, many people got sick this year, with people leaving early having come down with Covid according to festival organizers.

“What do you expect when you put 80,000 people together over an extended period of time? You expect lots of cases,” said John Swartzberg, clinical professor emeritus of infectious diseases and vaccinology at UC Berkeley’s School of Public Health. He says that based on what we know about other respiratory viruses, the damage caused by the dust at Burning Man might also increase the risk of getting COVID.

I also read many comments on Burning Man as a capitalist enterprise.

I agree. Burning Man is magic. Getting people to work for free and then charging them money for the privilege is magic. That’s what I’m doing in my not-a-business. It’s not exploitation or a version of slavery, it’s magic. No one can argue with magic. I’m a non-profit too. The money I make from all of this goes to my mission to change the world from my perspective. It’s relativity. It’s physics. It’s natural."
It will be said, of course, that these are the bitter observations of an old, fat, crippled incel afraid of leaving the front porch.  Well. . . that may be true, but who says I have to be in the right to criticize?  And in truth, I went to the Burning Man Corp. website and found that we can keep The Burn year round with Second Life  (link).  I didn't realize that Second Life was still a thing, but a quick Google search informed me it was.  AND. . . you can get started for FREE!  If you don't know what SL is, Wiki can help (link).
That may be just the ticket.  I can have a virtual life without ever leaving the couch.  And I can pick who I want to be.  I mean, there is no rule against me becoming the Burner Girl our correspondent believes me to be.  I can be lithe and swim in the lake at the after party in the ritual cleansing as documented by our correspondent. I owe her a debt of gratitude for her perseverance.  We all do.  Coming back from the desert like a biblical prophet is certainly a shock, like returning from Viet Nam or Afghanistan, but the memories, the lessons learned. . . they will be everlasting.  If she is not addled by the adventure, she will be ready for whatever horrors are to come.
It is good to be a survivor.  Envy that.
* * *
UPDATE!  THIS JUST IN! 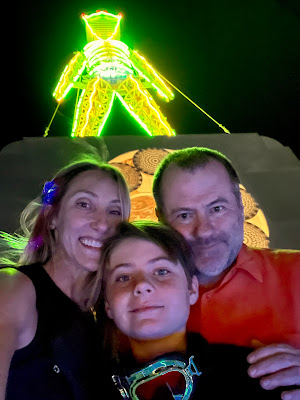 "There was madness in any direction, at any hour. You could strike sparks anywhere. There was a fantastical universal sense that whatever we were doing was right, that we were winning. And that, I think, was the handle–that sense of inevitable victory over the forces of Old and Evil. Not in any mean or military sense; we didn’t need that. Our energy would simply prevail. There was no point in fighting–on our side or theirs. We had all the momentum; we were riding the crest of a high and beautiful wave."
H.S. Thompson
Posted by cafe selavy at 7:30 AM