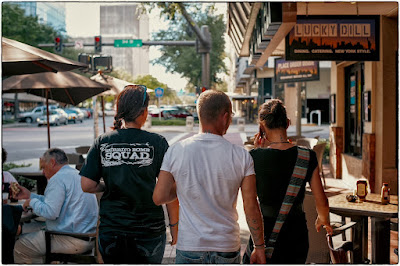 I got out last night among the bustling throng.  It wasn't night, but as close to it as I was willing to go.  I went back to my once favorite bar and got the shrimp tacos and a pale ale.  God, those tacos were delicious and the beer perfect.  But there were compromises.  The place was packed to the rafters and there was only one seat left at the bar, the least desirable one next to the servers station.  Everyone had spaced their chairs to make more room for themselves, so I sat overlapping the station's rubber mat by half.  The fellow next to me made no move to accommodate me.  Indeed, I imagined he was spreading his wings to worsen my plight.  He bothered me.  When a server came up, I said that I was crowding her a bit, wasn't I.  She made a shitty comment I didn't quite hear, then looked at me and laughed into my tender eyes.
In truth, I was nervous being out in a crowded bar alone.  I am not used to being nervous in this way, but there is nothing to be done about it now.  I would simply have to smile or frown and try to stay out of trouble.  I spent an athletic lifetime of not being nervous alone in bars always thinking I could either outfight or outrun trouble.  In truth, I never was much of a fighter, and I should be grateful for the excuse now, but I am not.  It is easier to back down or step aside when you think you don't have to.
So. . . I made myself small and looked up at the t.v. broadcast of college football.
I didn't know any of the bartenders, but the young hipster making drinks in front of me was chatty.
"How's it going today?" he asked.
"Good, good," I grinned.
"What did you do today?"
What?  The place was jammed and he was swamped and he wanted to know what I had been doing?  Crazy.
"I just finished processing some photographic tintypes," I said like a real nerd.
"Really?  How long have you been doing that?"
"A lifetime," I said.  "Wait, you mean the tintypes?  Oh, I just started with that.  It hasn't been working out, but today I got two images, so. . . ."
"What is your subject matter?" he asked.
Whoa!  Indeed!  I thought quickly.
"I'm hoping to do a series of portraits called 'Work' and 'Play'," I said.  It sounded stupid to me right away.
"I'd like to see some sometime," he said.
I grinned.  "I'll bring some in when I get them going," I told him.
It went on like this.  When a group of young guys crowded the server's station, the hipster said something to them that made them move then looked at me and shook his head.  We were pals now, I guessed glad to have some recognition.  I could still be "cool," I thought.  I'm just way out of practice having barely spoken to anyone for so long.
When I had finished and he handed me the bill, I held it under the light beneath the bar to read it, but I couldn't.  The print was just too small.  I stared and squinted for some time, but I couldn't make it out.  I turned to the fellow I had wanted to move and bumped his arm.  He turned and looked at me.
"How are your eyes?" I queried and held up my check.  He read it to me.  "Thank you," I said.  The woman he was with looked at me, and I said, "You'd think in a place like this they would have old man glasses lying around the bar like free peanuts."
"Oh, I can't see anything either, even with my glasses," she laughed.
Now we were all friends.  That's the way it always goes.  I'd forgotten.  You sit down and say something swell to the person sitting next to you.  It works.  It never pays to be the asshole.
When I got to my car, it was still early.  I hadn't been in the bar so very long, but it was a start.  Now I would go home and make an Old Fashioned because I had all the fixings and because it was so easy.  Then I would finish one of the worst novels by an author who sometimes was good so that I could move on.  I'm getting nothing from the contemporary novels I am reading really and have decided to reread some of the good things I haven't read for a long while.  The bad novel by the sometimes good author did rejuvenate my interest in old Chinese and Japanese poetry, though.  Li Po and Basho in particular, but also Tu Fu who wasn't mentioned in the novel.  There are some classics I've never read.  There are plenty.
The last page of the novel on my Kindle informed me that they had released a film of one of the author's novels, "The Forgiven."  I Googled it.  It had really mediocre reviews, but critics and praised Ralph Fiennes' performance.  I ordered it up on Amazon Prime and spent the rest of the night watching it.  Another night alone on the couch.  It has become so familiar.
I will cook something good for my mother tonight.  What, I haven't decided.  Maybe a cassoulet or a beef bourguignon, but probably something simpler.  I might wait for fall to try those heavier dishes.  Maybe I'll try a simple Sunday roast.  This, I'm afraid, has become the trajectory of my life.  There are, however, things upon the horizon which might even turn out to be fascinating.
Have you ever tried to reach the horizon?  Give it a try.  Go out and take a look, then head in that direction.  I'll wait for your report.
Posted by cafe selavy at 9:11 AM