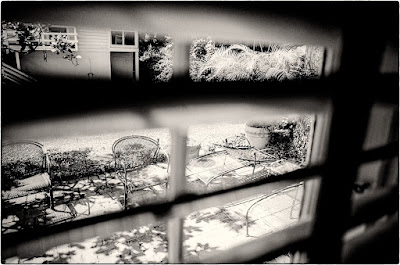 "I haven't had any training for this.  It's like I got thrown into the pool before anyone taught me to swim and am expected to play left driver for the water polo team."

That was me at the bar with C.C. talking about getting old.  And it's true.  I spent my entire life in "youthhood."  Never, not once, did I think about the other.

I said this as I winced standing up from the table where we were eating boiled peanuts and roast beef sandwiches under speakers blaring bad rock and roll that was, I suppose, intended to encourage you to drink more of their home brewed beer.  It was not only my knee that was hurting, though. It would take less time and space to tell you what wasn't bothering me as I stood up.

We'd been speaking of my love life, or lack thereof.  What I expect, of course, is unreasonable.

"I really had an extended adolescence, though, didn't I?  I mean for someone who couldn't flash any money around.  Old cars.  A job at the factory.  A bungalow cottage.  Fuck me. . . I got a hell of a hall pass."

C.C. and I were meeting up before he took his next long trip to the mother/hinterland.  He wouldn't be around for awhile.

While we were eating, I saw Larry of the Dancing Larry videos getting a beer.  C.C. recognized him right away though they had never met.  I introduced the two of them and told Larry we were sitting on the patio if he wanted to join us, but Larry wasn't drunk yet and had a stack of about a thousand lotto cards to scratch off.

"This is my hangout," he whispered.

"Larry wanted to be an astronaut," I said when we were back at our patio table.  "NASA ran every test on him to set the limits for testing other humans.  I mean. . . Larry got more centrifugal force than they did.  They didn't want to hurt the REAL astronauts."

I reeled off a few Crazy Larry tales of adventure and daring while Larry sat at his table inside like a mad scientist scratching away at his lotto tickets.

"He was a hell of an athlete, a very good marathon runner.  Look at him now.  Jesus.  We're all fucked up."

The newest pain in my left foot sent a few shockwaves to my brain.  It is certainly some kind of arthritis.  Maybe it is a result of the accident.  I don't know.

C.C. and I looked at the time.

"Holy cow, we've been here for three hours.  I have to meet the group from the factory for drinks soon."

And so we split, he readying himself for another long journey across the heartland of America to places where they serve groundhog gravy.  He is going to see "our people."

A giant storm was brewing, lightening and thunder in the not to distant vicinity.  But I had been told about an old hotel that had a great bar and restaurant, and I wanted to have a look.  I thought I knew where it was and how to get there, but when I got close enough to see it, I could not navigate the maze of one way streets to get there.

"Really?" I said out loud and circled back for another try.  And again.

"Shit--Hey Siri, map me to the Welbourne."

I should have done that from the start.  The route was definitely obscure.  When I got there, it was definitely a hotel, and I didn't see any signage for the bar or restaurant.  I drove to the end of the dead end street and backed up to look again.  And again.  I saw a sign for "More Parking in Rear," and drove around the hotel.  And there it was, or at least a tiny handprinted sign pointing the way to it, but there were no parking places for visitors.  Every parking space was assigned to a room.  A burst of lightning and the boom of thunder and the the rain began to fall.  Fuck it.  I knew where it was now, sort of.  I needed to get home.

Traffic was slow.  Rain at the end of the workday.  By the time I got home, I was bushed.  Getting out of the car, I grabbed my phone.  Wait!  Where's my wallet?  I opened the center console which is where I usually dump it.  It wasn't there nor in my back pocket.  I looked around the car's interior.  Nope.  Really?  I was getting rained on, so I ran into the house and called the bar.

Good news!  They had the wallet.

The bad news was that I would have to drive back through the rain and work traffic to get it.

"Thanks.  I'll come down tonight and pick it up."

I had shot some tintype plates that morning, something new that had come in the mail from Europe a few days before.  I was excited and had taken them right to the dark tent to process them in the special developer I had to mix up.  The first plate turned pure black.  So did the second.  I had to think through this.  Over or underexposed?  Under.  Yes, I was sure it was underexposure.  So I ran back to the house and shot two more plates at double the time.  Those two plates were sitting on the table waiting to be processed when I got home.  I had about half an hour before I was to be at the oyster bar with the kids, so I mixed up another toxic batch of developer and headed to the dark tent.

Same result.  I had used up four of the ten plates and had nothing to show but a hole in my wallet.  It was time to go meet the kids.  The rain was coming down.  Fuck it.  I needed my wallet, so I drove back to get it.  I stepped out of the car with the idea of running up to the roofed patio.  Ha!  I stepped out onto my bad left foot and painful right knee and took a half step.  Then another.  The rain didn't care.

When I got to the door, the fellows inside were waving my wallet.  Sweet.  They remembered me.  I thanked them and hobbled back to the car.

The oyster bar where I was to meet the kids is on the Boulevard.  As I neared my house, I decided to just drive on and see if I would be able to park anywhere near.  In the late afternoon/early evening rain, the Boulevard was empty.  I parked twenty feet from the entrance to the alleyway that led to the bar, but I travelled gingerly this time and was good and wet by the time I stepped inside.  The place was freezing--and empty.

"May I help you?" a woman eating near the door asked me.

"Well, you've come to the right place," she said with a sly twinkle in her eye.

I stepped back into the alleyway, took a selfie under the bar signage, and texted it to the group.

As I headed back to the car, my phone pinged.

"Why are you there today?"

"We are all meeting there tomorrow.  Are you confused again?"

This wasn't the first time I'd gotten a date and time wrong.  More people commented.  I had outed myself.

"He is always living in the future," someone wrote, and I got a new monicker.  Call me "Future C.S."

I drove back to the house just in time for the six o'clock propaganda.  I didn't have it in me to go through the rain again.  Grocery shopping was out.  Dinner was going to be a ripe avocado and left over chicken from the night before.  AND. . . I still had half a pint of pistachio gelato I'd gotten then, too.  First, though, I wanted a pre-dinner drink.  I fell into the leather couch.

"That was a good one," I thought, "about being thrown into the water polo pool.  Quick thinking, that.  Yea. . . I'll have to use that one tomorrow on the blog."