And a Moon Rose Over an Open Field 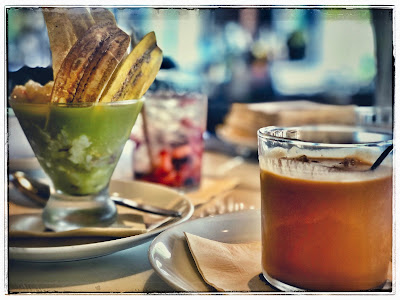 The lighting was bad as I was sitting across from the wall of ceiling to floor windows that lighted the bar.  Still, I needed to make a photo of my lunch for friends who sometime join me here.  It is my version of Instagram or whatever social media people post their lifestyle photos to.  I'm sure it is Instagram.  Earlier, I had been introduced to a pretty young woman who had been working a $300 a week job before she became an Instagram influencer.  Now she earns hundreds of thousands of dollars a year and companies furnish her with clothing and accessories.

This was to be my Instagram shot.
Boom!  Nailed it!  Fucking phone cameras are great as are the apps that allow you to enhance their images.  If I were just starting out, I'd never buy a camera.  All I would ever use would be my phone.
"I'm not JUST a cocktail photographer," I wrote.  No sireee.  That quick pic could be the anchor photo for Bon Apatite.  Maybe.  But who cares?  We have Instagram.
Of course, we all know what terrible things social media does to the mind.  It is a horror show for kids, they say, and adults alike.  I avoid it as much as I can.  It is a wasteland of gorgeousness and fantasy, sure. I'll admit that from time to time, I'll take a peek, but on the whole, I have come to reject it.  Heroin is less harmful, I think.
But don't listen to me.  I just read that 90% of Americans polled say that the country is in a mental health crises.  Most blame the contemporary political climate and inflation.
I blame pop psychology.  Counsellors.  Life Coaches.  I forget the exact stat on this, but I think it was that one in five Americans have seen a mental health counsellor.  You know, somebody with a Masters Degree from East Northern Technical College who has done all the paperwork and paid the state to hang a shingle.  You can recognize one of their victims by the language that they speak.  They talk much of "gaslighting" and "narcissistic personality disorder," popular phrases on any of the serial killer shows on t.v. " Be your best self," they say with theocratic conviction. "Give yourself permission" and "be kind."
Etc.
I don't know anything.  Don't listen to me.  I'm as fucked up as anybody.  More so.  I'm just so afraid of the "mass mind" that I have to disagree.  All of it seems to focus on the individual experience.  We have either Hamlet's or Ophelia's mental disorders.  So they say.
I prefer Beckett's solution which seems on the surface far worse.  "I can't go on.  I'll go on."
I heard a song the other day, a cover of Simon and Garfunkel's "America."  It reminded me of the hollow emptiness of growing up in a time before internet and cable and cell phones (with cameras) when there were long, lonely spans of time and landscape.  You sat.  You looked.  You thought.  Coffee and cigarettes.  Greasy diners and conversations with strangers.  There was that and the great vastness of the universe which spoke to you through clouds, the sound of a rivers, the far off rush of the wind through distant trees.  There was the world, and you went into it.  Literature was your guide.
And so I went.
"And a moon rose over an open field."
Posted by cafe selavy at 8:49 AM