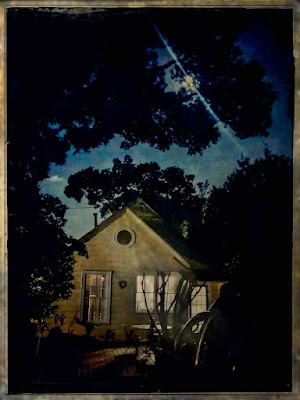 The water in the lakes keeps rising despite the absence of rain. Mysterious to some, it is again a simple matter of physics. I guess. So while there are those still suffering, it is difficult for me to write about the beauty of these days and nights.
But I will.
Maybe it is the manual labor I have been doing that makes me feel this way.  It has now been seven days since the storm.  The week before, I sat around the house and did nothing.  Barely moved.  Hardly showered.  Never exercised.  I think I mostly just sat and stared.
Since the hurricane, all I have done is work.  No, that is an overstatement.  By a lot.  I have worked, though.  That is true.  Each day.
And as I have said, the weather here now is nearly perfect.  Daytime temperatures in the low to mid eighties, nighttime temperatures in the sixties.  If your house or neighborhood or town or city have not been destroyed, it is joyous.
I came home from visiting my mother last night thinking of watching the news.  Rather, I made a simple Margarita and sat outside. 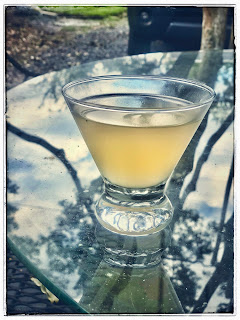 I was joined by the little feral one.  She was calm and relaxed and, as Hubert Humphrey used to say, pleased as punch.  She ate and I sipped and we communed with the passersby and with nature.  In a little while, for a little while, we had company.
I hated to leave the deck on such a fine night, but I needed to make my own dinner, a catch-as-catch-can dish of lentils, eggs, and rice--a surprisingly tasty concoction.
After dinner, though, I was antsy and there was still a residue of light in the air.  I went out with my after dinner drink and walked around the neighborhood, first looking at my house without a fence from different vantage points, then into others' as the romance of warm light falling from living room windows into the purple evening took hold.  Walking back home, I saw my own house with the half moon above, grabbed my phone, and took a pic. Then another.  Then another.  I couldn't get it to quit using flash.  Ten or so pictures in, I figured it out.  Oh, my, I thought.
"Have you ever danced with the devil in the pale moonlight?"
Out of nowhere, the long gone beauty of the neighbor's cat appeared.  Where in the hell has he been?  I had assumed he was dead, but I was afraid to ask.  Nope.  There he was, happy and healthy.  He came when I called him to me, and I gave him some love.  Then I heard a commotion above me.  It was the little feral cat navigating the branches of the tree as she climbed down from the neighbor's roof.
"Meow.  Meow."
Both she and me.  We talked her entire way to the ground where she was adamant that her two boyfriends should not intermingle.  She ran between us from one to the other mewing in earnest.  As we had not been together as a threesome for so long, I decided to sit on the deck for awhile and commune.  On the deck--not in a chair on the deck.  It was time for a little stretching.  I've become as flexible as a two by four, so I was gentle with myself.  I did what I could.  Painfully.  Still, it was gorgeous out there in the evening stretching and meditating with my two pals.
That morning in the gym, I found out that one of my new friends'' lake house was flooded.  He is rich and lives in one of the best parts of town.  He said he will have to rip his floor up in the front room of the house.  Then I found out that FEMA was going to pay for the repairs.
"I may get a new boat out of this, too."
Later in the day, I heard that another well-to-do acquaintance who had no flood insurance is getting a check for over $100,000 to repair the damage in her house.  And I started thinking.  I'm going to bet that the majority of the money FEMA will pay out is going to go to the wealthiest people in the state.  I may be wrong, but the damage to the most expensive homes is going to be far more than those living in "bunny hutch" houses.  And navigating the system is going to be harder for some than for others.  Those who paid for flood insurance, something that is not cheap in this state, will get nothing more than anyone else.  Somehow, this money giveaway is going to be as lopsided as the forgiveness of student loans.  Those who worked and sacrificed and paid their way through college without taking loans will get nothing for it.  I think the idea of relieving people of their burdens is great, but somehow the system is terribly flawed.
"Oh, really?  D'ya think?  The capitalist system, you say, is flawed?  Huh?  What a concept."
I was told I could get FEMA money for my broken fence.  Hmm.  I mean. . . if everyone else is doing it. . . .
The maids come today.  I have first world problems to take care of.  I must pick up before they come.  This afternoon I will go to the market to get some of that "expensivist" cheese and some olives and a baguette for tonight.  And a good bottle of wine.  The house will be clean, the yard will be mown, and the cool air of evening will be lovely.  Should I enjoy it, or should I worry about the problems of others?
That is the question.  A different dilemma than Hamlet's perhaps.  Not "to be or not to be," but "to be happy or not to be happy."  There is too little joy too often.  Maybe I will indulge myself just a bit.
And, of course, if I do, you'll be the first to know.
Posted by cafe selavy at 8:42 AM