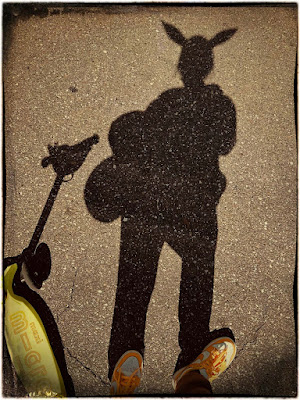 It is Halloween, and Holy Smokes, there is no scarier reminder than this.  What strange creatures haunt our waking dreams and nightmares?  What human oddities?  In truth, adults who dress up for what is now known as the Fall Festival do frighten me.  I never even liked getting dressed for work, but THESE people. . . .

Later in the day, I got another photo, though, that ripped the heart right out of my chest.  Maybe more on that later.  Probably not.

In response, I told a story about myself as a hillbilly youngster jumping the fence at the rear of the fair where the carnie's trailers were grouped so that I could get in for free.  Climbing a hurricane fence in the dark is always difficult.  About half the time you catch some piece of flesh as you wobble over the sharp metal projections that extend over the metal cross bars.  And this fence was tall, so the drop to the other side was sketchy.  When I stood up there in the darkness barely penetrated by the weak bare bulbs temporarily strung about the grounds, I was face to face with Jo-Jo the Dogface Boy who was washing himself in a basin.  Like a shot, I scrambled back over the fence already running before I hit the ground. 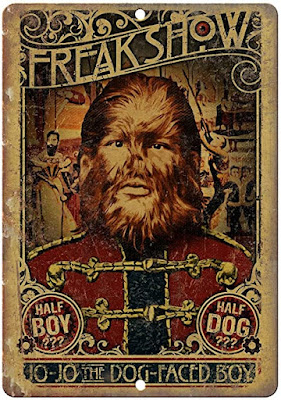 Only it wasn't Jo-Jo.  I looked him up.  He was born in 1884.  Could it have been Lionel, the Dog Faced Lion Boy?  Nope.  He was dead, too.  Well shit the bed, as my aunt Pat used to exclaim.  Who was it then?  Apparently, there is always a reincarnation in carnival life.  Perhaps it was The Mexican Wolf Man.  There have been a whole bunch of people with the same condition who have worked carnivals and fairs.

But I have been telling that story for years.  I guess I will have to update it now, but it doesn't seem nearly as robust.  Who ever heard of the Mexican Wolf Man?

I should join a carnival.  I've made my own incredible transformation.  My new old friend is the most beautiful woman in the world.  Even today.  She remembers me one way, I know, but I have been bitten by "the beast," apparently.  Find the Gypsy Woman.  She'll know.

There is no wolfsbane strong enough to counter what I have, though.  Once bitten, all that is left is the slow descent into horror and madness. 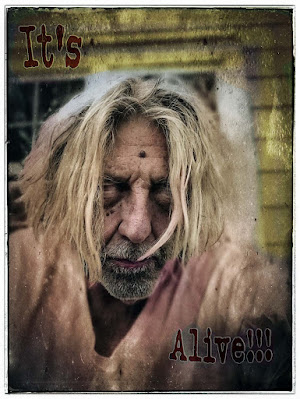 OK, OK. . . I'm just mocking myself in an attempt to allay my fears which you may read more about one day.  Probably not.

I didn't go to the party my writer buddy invited me to on Saturday night.  Uh-uh.  Not me.  I stayed home with a sulky illness, the sort you get when invited out.  It is more emotional than physical, I think.  I wasn't hungry, so I had a tequila Bloody Mary to sooth my savage breast.  Sunday morning, it seemed like such a good idea, I did it again. 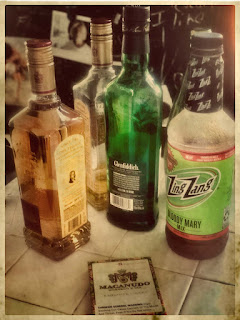 By Sunday afternoon, though, the lack of most nutrients was getting to me, so I decided to make a beef stew for my mother.  It was average at best.  Still, it was a meal that stuck to the ribs as the old people used to say.

Tonight I will pass out candy to the kiddies with my mother.  I've been doing that with her now since my scooter accident.  She has a complete Halloween street.  The neighbors go all out decorating yards and building spook houses for the kids who come from far and wide to see it.

"Come see Jo-Jo, the Dog Faced Boy.  For just a quarter, you can see him live!  Before the curse, he was a normal man living a normal life.  Now you can see the transformation before your very eyes.  Behold the Horror and take heed. . .  it could happen to you!" 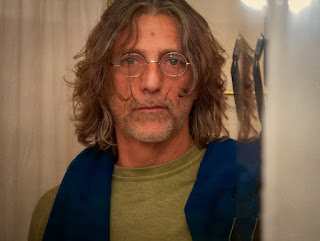