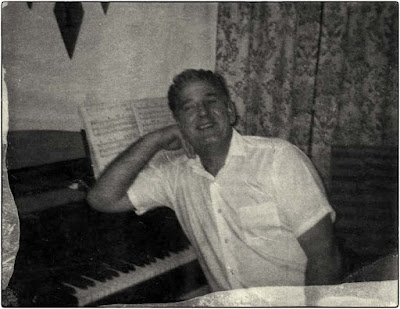 This is a photo of my father.  There are not so many of them.  Nor of my mother.  Nor me as a child.  It was the dark ages back then.  No iPhones, digital cameras, computers.  We had a telephone party line.  Sounds fun, right?  It was cheaper than having a private line.  We shared with three other families.  You weren't allowed to talk on the phone much.  Sometimes when you picked up the phone to dial, someone else was using the line.  It was rude to listen in on the conversations of others, but sometimes I did, little devil that I was.

We DID have Polaroids, though.  Yup.  This picture was scanned from one.  Those white strips on the bottom and left side are where the fixer squeegee didn't hit the image.  But in just sixty seconds. . . .  It was a freaking miracle.

As you see, we also had a piano, a baby grand.  My father had music lessons when he was growing up.  All the kids in the family did.  That must have been when?  In the thirties?  Talk about dark ages.  My dad would sit down at the piano occasionally and beat out a song.  He loved to play Floyd Cramer's "Last Date," that little country honky tonk classic.  We had the album, too.

One day, my father got pissed at me for banging that stuff on the piano.  He told me I didn't know how to play shit.  So. . . home alone, I put on the album and learned to play "Last Date."  The catch was, the album didn't play in the same key as my father did.  It was played in sharps--lots of black keys.  Dad played it in "C," I think.  When he came home one night, I sat down and played "Last Date" for him, and then I told him that he was playing in the wrong key.

I think that is when I got my first drum set.  I never got any better on the piano than that.  I should have gotten lessons.

Poor Old Pop, though.  He worked every day and got two weeks of vacation every year.  Sometimes he worked on Saturdays.  Overtime.  We needed the money.  My mother worked, too, so I had a lot of solo time at home.  Latchkey Kid they called it.  It was cool.  As I got older, my parents fought a lot.  I didn't like being around them.  Eventually, they got a divorce.  In some ways, it was a relief, but I ended up living in my car for a while trying to finish high school.  I eventually ended up living with my father in a shithole one bedroom duplex he had rented.

In my senior year, while I was a the beach doing the last part of my scuba certificate, an open water dive, he went for a drive and had a head on collision with another car.  Broke most of the bones in his chest.  Broke his hip.  They had to cut him out of the car.  He had always been his family's hero.  "I'll tell my uncle Carl," they'd say to serve warning.  Dad had been a fleet champion boxer in the navy and was known for his feats of strength throughout the county where he grew up.  The accident broke more than his bones.

As you can tell from his smile, though, my father was a sweet man.  He called everyone "Sugar" and "Honey," not just women.  All the kids in my neighborhood loved him, even the bad kids.  He was a funny guy, loved to tell jokes and make people laugh.

POP.  Poor Old Pop.  Just thinking about circumstances and parallels.  There are always parallels and circumstances, genetic and social.