Phone Photography And My World of Fashion 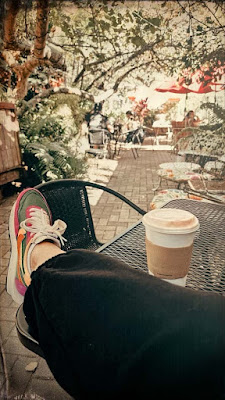 For quite some time, throughout the pandemic, I've been sending friends irritating pictures from my phone.  But something good has emerged from it.  The pictures I get back now are improving.  People have upped their phone photography game.  I get pics now, like the one above, that are damn near art.  The thing about a phone pic is that you can edit it in a Minnesota Minute.  By the time I boot up my computer, download pictures from my camera, and then start up Photoshop, I could have edited ten phone pics.  And that's just the boot up time, not the actual workflow.

The drummer from our old band was a photographer, took his MFA at U of San Fran.  He got lymphoma which he suspected was from working in darkrooms for many years.  His iPhone now is his only camera.  Of course he uses multiple editing apps to get "a look," but for some reason, the ability to quickly process a photograph on your phone if far greater than what you can do with the expensive apps on your computer.  Phone apps generally cost less than a couple of bucks.

For those of you who haven't, learn your phone apps, otherwise looking at your pics is like looking at someone's bad slide show.

I'm using today's photo without permission, but I think it will be o.k.  Thanks kid.  Nice shoe.

Yesterday was a bit of a wash.  I got a late start to the day, but after the gym, I drove to Lowes to pay off the charge card that I applied for when I bought my mother's washer.  I got $100 discount for doing so.  I had a month to pay it before a 29% interest rate kicked in.  I guess they really like to rape people who can't afford to pay cash.  29% is pure evil, especially after a devastating hurricane.  But, you know. . . gotta protect the rich.

I had to get home quick, though, to meet the window repairman who was supposed to be here between two and three.

He eventually came.  Didn't bring a board big enough to fill the hole left by removing the window.  Dicked around piecing together some of my leftover lumber to make a piece.  Left at six.

No visit to mother.  I didn't want to cook, so I went to dinner at a good Italian restaurant with a friend.  Of course, we sat at the bar.  And, as so often is the case, it was a little inconvenient for the fellow who had made plenty of space for himself moving about the chairs.

"I'll sit next to the dude," I said loudly.  "He'd be trying to look up your skirt the whole time," I said trying to be funny.  The prick apparently didn't think so.  He didn't respond.  Fuck him, I thought, just move your slimy ass over.  He did with obvious irritation.  So, ok, I just angled myself where I wouldn't have to look at him.

The barman remembered me though I haven't sat at this bar for years.  He's a great guy.  Makes Bloody Mary's with fresh squeezed organic tomato juice that comes from the kitchen.  Friendly.  Funny.  We ordered two Chianti Classicos.  He poured a bit from the bottle, stuck his nose in, and opened a new one.  The asshole sitting next to me got a little pissy with the barkeep.  I think he got his pour from the now discarded bottle.

A couple arugula salads and then the old bullshit.

"What are you going to get?" I asked my friend who was looking over the menu.

"Well, I want some chicken and pasta with capers.  They have those ingredients here.  They can certainly make that."

I told the bartender.  He sent in an order for Chicken Picatta.  We decided to split it.  And boy oh boy, it was really good.

Teaching the undecided how to live is always an irrevocable joy.

I knew other people at the bar and chatted a bit, then, dinner and drinks finished, I payed up and got up to leave.

"Thanks, man," I said to the fellow sitting next to me.  He didn't look up from his phone.  I said something else to which he didn't reply.  Old crippled man that I am, I wanted to swing my elbow as I stood and turned and clock him in the jaw with an, "oh, shit. . . sorry man.  You o.k.?"

But I didn't.  Everything dwindles except the rage.  Bad hillbilly blood brought up in a violent cracker neighborhood.  I can take all the showers I want, but it never completely disappears.

I got a FaceTime call from Q.  His birthday was two days ago.  As I always do with everyone's, I missed it. I hate birthdays, mine and others.  Still, I feel bad about it.

I don't usually answer my phone after nine or so unless it is my mother.  I just don't want to deal with people who call me then.  Living on the west coast, Q's calls often come in late.  Last night I answered.  We hadn't spoken in many months.  I, being a loner, forget that other people have wives and kids and mothers and whoever in the house.  I am not the fellow you want to FaceTime with if a delicate audience is within earshot.  Especially after nine.  Liquor loosens lips and sinks ships as does taking off the mask you may have had to wear all day.

Two packages arrived in the mail for me yesterday.  One was the Peter Beard bio.  The other was an old Patagonia microfleece sweater.  I bought it on eBay.  I had one for twenty or thirty years--I don't know--that disappeared.  I haven't any idea what happened to it.  It and another Patagonia fleece that were winter favorites are both gone.  I have my suspicions, but not a bit of evidence.  This sweater, though, has the weight of helium, is softer than a baby's hand, and is perfect for chilly southern weather.  Mine was a bright rust colored orange.  Months ago, I decided to look for one on eBay.  It was not orange, but it was the same sweater.  The day before the auction was over, I made a bid.  I capped it at $50.  In the last hours of the auction, it went up to $150.  Holy shit.  For a thirty year old sweater.

Last week, as the temperatures dipped, I thought to look again.  Found one in green on auction.  Opening bid was $30.  I offered a "Buy Now" price of $40.

Boom!  It arrived yesterday.  It is a pretty sage and looks new.  After buying so many clothes from Chinese companies that are sized for toddlers. . . . .  I am just ecstatic.

Somehow, though, I got bleach on my favorite black t-shirt.  There is never any winning.  It is difficult to find favorite t-shirts, even when you reorder from the same company.  They vary as much as Levi jeans, and as you know, no two Levis of the exact size have the same fit.  A favorite t-shirt is like a favorite pair of jeans.

I used to order black t-shirts from James Perse in the past, but they don't look so good on me now.  I'm just not "fashion fit."  I told my fashion maven friend that I was going to only wear mumus from now on.  She said she loves mumus, and that we would start #comfyseason.  I warn you, don't Google it.  You will end up listening to a hideous Dutch rapper album.  But comfy season is year 'round at my house.  Way too much so.  I am going to have to get a wardrobe if I am to continue my appearances in public.

I'll need to look, however, at the fashions of American Samoa now that I have embraced those standards of beauty.

And mere moments after I posted, I read this article. . . which only goes to show how far I am from the madding crowd.