The Day of the "Not a Bad Guy" 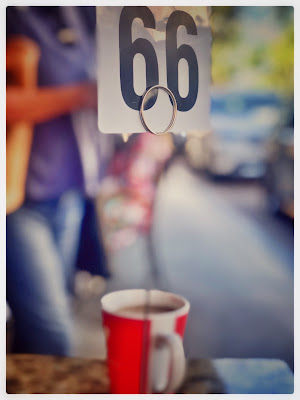 I didn't party.  I can't keep up.  I'm a homeboy now.  I enjoy the luxuries of my own domicile, the peace, the quiet.

When I woke up Saturday, I wanted breakfast.  Friday night's pub grub had not fulfilled me.  I felt ravenous.  I drank my morning coffee and did the things I do, but I didn't want to get dressed.  I got dressed anyway and drove uptown.  I wanted a croissant Benedict from the little French bakery.

Driving was a mistake.  The Boulevard and surrounding environs were packed with out of towners trying to escape their bunny hutch lives in the hellish developer wastelands.  That's right.  I said it.  Those developments look like a store bought tomato on the outside, but long streets of large stucco houses with nearby Publix markets and a handful of chain restaurants are neither soulful nor satisfying.  They propagate a deadly spiritual sterility.

"You want to go to the Boulevard today?  They have the Farmer's Market and the big Catholic Church has something going on for the kids."

And so they get into their new SUV and drive into my own hometown.  They buy nothing of substance.  They walk the streets with foo-foo coffees in hand looking around as if they'd come to Wonderland.

"I just love these little shops.  Everything is just so. . . charming."

The people who come from the outskirt apartment complexes bring homemade lunches to the park with their cousins and uncles and their gaggle of children who, having never been outdoors before,  run around screaming like banshees.

O.K.  I'm done being an asshole for the moment.  It is not their fault.  I blame politicians and greed head developers for building these nightmarish places.  People have to live somewhere, and I don't blame them for being attracted to the nice things.  I am just pissed at how they've changed my own little village.  When I first moved here, you could park on the Boulevard in front of whatever store you were going to.  Now you can barely drive down it for the cars dropping off passengers and trying to park.

That's a long way of saying it took me twenty tortured minutes to find a parking place, and when I did, I was halfway back to my house.  I'm going to have to buy an electric bike.

The French bakery was packed, but I was lucky enough to get one of the few outdoor tables where I was sitting eighteen inches away from my neighbors, two retired ladies enjoying their day uptown.  Like the throng, they had driven in from one of those outlying areas.  I know this because, in spite of my unrighteous arrogance, I am really a nice guy.  The friendly type.  So as I ate, they filled me in on their lives.  One of the ladies said she comes early on Saturday to find a parking place.  She has a handicap tag, she said, and she used to always park right over there--she was pointing to a handicap spot right across the street.  But now, every time she gets here, that same car has "her" space.

It went on like this for most of my meal, but eventually my new girlfriends got up to stroll the Boulevard and look at the pretty things.

A family of four jumped in to claim the two-top right away.  The father or grandfather, I couldn't tell, sat while the wife and daughter/granddaughter and child went in to order.  I was finishing up the last bites of my breakfast under the dude's watchful eye.  After my last bite, I pushed my plate away and sat back with my coffee.  He reached over and put his hand on the chair on the opposite side of my table.  The thing that bothered me is that he didn't speak, didn't smile.  What the hell, I thought, as the devil in me started to rise.  Let it alone.  Be a nice guy.  So when his wife came out of the bakery, I said, "You can share the table if you like.  I'm kind of European that way."

That really warmed them up.  They had just gotten back from a three week trip to Albania to see relatives, he said.  He pulled out his phone and started showing me pictures.  They were very lovely.  I got to know all about where they went and what they did and how they felt about everything.  See, I thought?  It is good not to be an asshole.  Don't be an asshole.  Life is better when you are not an asshole.

So when the mother and child came out, I finished my coffee and gave them my seat.  And with a "it was a pleasure," etc. I was on my way.

As I walked down the busy Boulevard toward my car, a man reached back to take a woman's hand, saying, "I don't want to grab the wrong one."  I didn't hesitate.  I reached over and entwined my fingers with his in the other hand.

His eyes popped, and then he laughed a belly laugh.

"This is fun," I thought, "being out and friendly and all."

I'm really not such a bad guy.

But when I got home, I was deadly tired.  It was after noon, not too early to take a nap.  I didn't get up for hours.  I had missed or was missing the Oktoberfest that some of the factory crew had gone to, and I knew I was going to miss the Zombiefest or whatever it was that night.  I missed the quietude of my own home. I wanted to read.  I wanted a hot bath.  I wanted a healthy dinner.  And I wanted. . . .

But first, mother's.  It was a fine fall afternoon.  From there, I went grocery shopping and bought some kabobs. and Spanish sheep and goat cheese and some Greek olives.  Oh. . . and dark chocolate caramels.  And dark chocolate English toffee pieces.  And some delicious Hazelnut cookies, too.  I was going nowhere but to my deck to grill and chill.  And to share my meal cyberstyle.

My new old friend, though, won the photo contest.  She was having a nice Chianti at a pizza place with some six year olds down for a slumber party.  "Mother's little helper," I chimed. 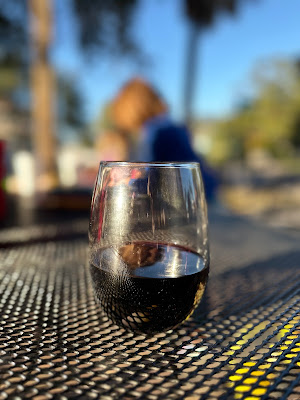 After dinner and some telexes to friends, I cleaned up the kitchen and ran a hot Epsom salts bath.  With lavender.  And, by god, a big whiskey.  I'm not sure if I do or do not recommend the whiskey in the hot bath.  When I got out, I was one limp noodle.  If I remember correctly, I may have showered then and washed my hair, but memory of that is blurry.  Another scotch, some more telexes, and then the couch where I turned on the television and fell dead asleep.  The next time I moved, it was 11:30.

I rose from my bed this morning after sunrise.

Shall I wear the bottom of my trousers rolled?"

Oh. . . I forgot.  I bought a pumpkin cake for the morning, too.  After I put this blog post to bed, I will have a good, thick slice.  Which I should do before the day escapes me.