Where Are the Clowns? 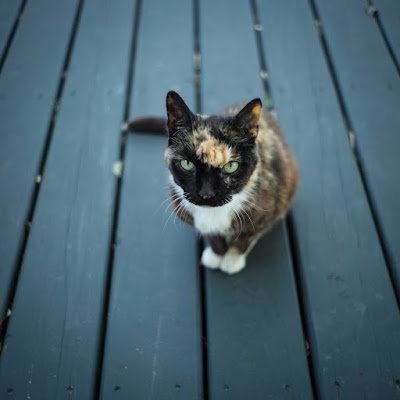 The photographs I like best, I won't post here anymore.  Then there are the ones that mean the most to me.  I'm not posting those here, either.  What I have left, from the Covid Years, turns my stomach.  Worse, I am uninspired.  I try.  I go out now to places far and wide, but I'm left with the same feeling.  And the things I wish to do, I can't.

Am I experiencing a Crisis of the Spirit?

I was in a quandary yesterday about whether to go to the factory town to meet with the kids for a parking lot Oktoberfest.  My phone was pinging.  "Where are you?"  "It's started."  Etc.  It was later in the afternoon when I left the house.  I called my mother and said dinner might be a little later than usual.  Then I asked if she was o.k. just eating alone.  I would come over still, but. . . .

The sky was blue and the sun was gentle and there was a crowd MUCH larger than I expected.  I found my pals SITTING AT A PICNIC TABLE outside the bar.  Dumb hillbillies and those whose aspiration is to one day go on a cruise crawled for blocks with "craft" beers in hand.  And though we sat outside, it was still impossible to hear what was being said.  Someone bought me a beer, a bitter IPA style brew in a plastic cup.  This was not Oktoberfest, I thought.  Where's the Oompa band?  The lederhosen?  The Chicken Dance?  The great German beers?

I went to a good Oktoberfest once, almost by accident.  It was in the big Downtown to the south.  The beer was great, but it was the Chicken Dance that really sold me on the whole thing.  I am not as cool as I would like to think, I guess.

I enjoyed communing with my peeps, though, and stayed longer than I intended.

"Is that the same beer?  Why are you nursing that beer?  I'll get you another."

It was a lie, though I WAS going to go see her.  But it was getting late, and on the drive home, I called her.

"Are you o.k. with me not coming over tonight?  I stayed too long and just want to go home and make a small dinner."

I cut off the interstate an exit early.  I needed to make two stops before I went home.  I needed wine, whiskey, and toothpaste. 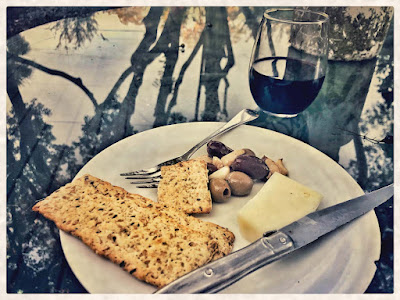 It was already beginning to get dark when I pulled into the driveway.  I poured some wine and made a quick plate to take to the deck.  I was exhausted.  I am always nervous in a group, and more so in a crowd.  The bank of emotional energy gets drained.  It was odd that I needed to sit after sitting all afternoon, but after nursing the bitter beer, the wine and the cheese and the olives were perfect.  I took a picture and texted it to my friend.  The picture would not go through.  I tried again and again, but I always got the "Not Delivered' message.  I felt a sad loneliness of a sudden.  I felt guilt for not going to see my mother, too.  Overwhelmed by a jumble of emotions, I felt myself sinking with the sun.

"I'm trying to kickstart my life," I thought, "but it just isn't working."  The world seems a simulacrum of what once existed, a plasticized version without depth, I thought.  Just a 2D model.  I can sense it in other people, too.  The carefree joy of old seems withered, the world devastated.  I know I am not alone in feeling this way.  The evidence lies all around.

Going to bed, I felt the lingering. .  what?  Sadness?  Depression?

But that's as far as I got.  I came up with no revelation, no plan.

I slept the night through dreams and nightmares.  You may have been there.  I can't remember.  In the morning, though, the night's hangover remains.

If only they'd had that Chicken Dance!  I think that would have turned things around.  I think that now I might be happy.  Simple pleasures and stupid things.