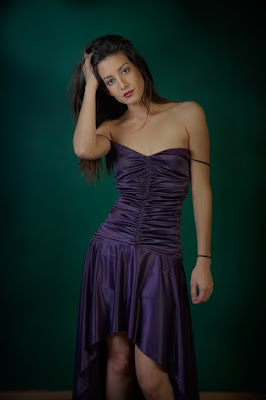 When we moved to Florida, my parents had nothing arranged.  They didn't know where we would live.  They simply sold the house, packed up clothes, and drove to the Sunshine State.  My first "home" was in a travel court made up of cottages surrounding a central courtyard, but we traveled the state as my parents searched for work.  My father was a skilled tool and dye maker, and he knew he could get work wherever there was a machine shop.  My mother found a job at a huge defense contracting company.  They had a policy that prevented married couples being employed.  My father had been offered a job there, too, but he thought it a better situation for my mother.  He was hired by another defense firm in a neighboring town.  Once established, they rented a house in a cracker neighborhood between the two defense plants.  Not long after, they bought a house that came up for sale just down the block.

The kids in this neighborhood were nothing like the kids I knew at the nursery school.  They didn't have toys, didn't wear shoes or shirts.  The lawns was made of sand spurs and sand, but their feet were toughened by walking barefoot on paved roads.  The first day I went out with the neighbor kids, they were playing war.  I had a toy rifle.  They had sticks.  "Kyoo, kyoo," they would intone, imitating the sounds of guns and bullets.  They were fascinated by my toy rifle.  One of the bigger boys broke it.  I learned quickly not to bring my toys outside.  Soon, I too had abandoned my shirt and shoes.  I learned to play with sticks.

One day, the little cracker neighbor boy my own age and I were arguing.  His older brother hit me and we fought.  I had never been in a fight before, but somehow I beat him up and made him cry.  It felt terrible and I wished to cry, too.  But I didn't.  Rather, I walked home victorious.

The next day, the kid shot me in the back with a homemade bow and arrow constructed of a sapling, a piece of string, and a stick sharpened to a point in the street.  Fortunately, the bow was not powerful and the arrow missed my kidney by a quarter inch.

I was learning fast.

My mother enrolled me in school.  My first grade teacher was Miss Farmer.  She was young and, as I remember her, dramatically beautiful.  She wore her hair fashionably pinned and dressed in pencil skirts and what seemed to a young boy elegant dresses.  I was in love.

In those days, children were grouped according to their intelligence and achievements.  I was placed in the Bluebirds, the highest group.  This was owed to my grandmother, of course, who had doted on me and had given me a head start on learning.  I liked sitting in the small group with Miss Farmer.  It was the best part of the day.

It wasn't until second grade that I liked another girl.  Susan.  Everyone liked Susan.  She was very proper and well behaved.  She wore her hair in pigtails and wore smock dresses, white socks, and shiny black Mary Jane shoes.  She was the smartest kid in class.  When Valentine's Day came, her shoebox was full of the largest Valentine cards.  I wanted her to like me.

Nothing ever came of it, though.  She was already a girl self-possessed.

One day at the grocery store, my mother was talking to the mother of one of the kids in my class.

"Did you hear about Miss Farmer?"

My mother looked at me, concerned.

The other mother shrugged.

She had been something marvelous in a terrible and hideous land.