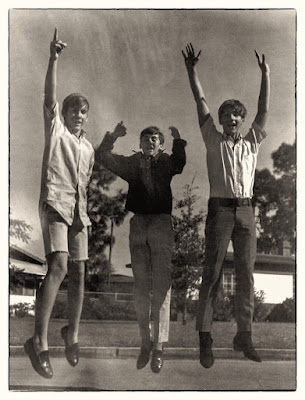 I've been mulling over and trying to write the next piece of my bildungsroman, but it just isn't flowing.  I keep writing clumsy set pieces saying, rather than showing, that the world around us was changing, that the year was a harbinger of things to come.  It is true we were growing up in turbulent times.  Even some of the "straight" kids were wearing madras shirts and paisley.  Skirts were getting shorter and the girls were getting shapelier.  They were maturing far faster than the boys, of course, though our growth spurts had begun making us miserably uncoordinated and plagued with the first acne.  Most kids were now allowed to go to chaperoned dances, and those sweaty, closed rooms would reek of Clearasil and cheap colognes like Brut, English Leather, and Jade East.  By now, even the nerdiest kids were beginning to make out, and in bathrooms and locker rooms boys would regale one another with stories of who let them  "cop a feel."

I was leaving the boy band behind and was playing solely with Steve and Wayne in the OO Sounds. We had a more "dangerous" vibe and a widening popularity as we played at parties and youth centers further from home. 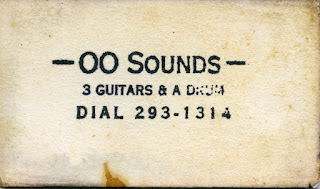 We decided to chip in our money and have cards made up, but all we could afford was a box of plain white cards and a rubber stamp.  We would fancy them up a bit by drawing a magic marker across the edges of the card to give it a black border.  We had an "agent" now, and he had gotten us a gig to appear on local television.  "The Jimmy Harper Show" was an early morning talk/entertainment show, and we were scheduled to play three songs, two before the break and one after, just like the Beatles did on "The Ed Sullivan Show."  Two days before we were set to appear, though, my mother's parents, who lived on the coast, were in a terrible head on car crash, and both of them were hospitalized .  We would have to go.  I begged and pleaded, though.  I was old enough to take care of myself, I said, and somehow I convinced them.

My parents stayed at my aunt and uncle's house, and in the morning, they turned on the t.v. in hopes of seeing the show.  Normally, they were too far distant to get that channel, but for some reason, maybe the time of day, maybe atmospheric conditions, the station came in and they got to see us play.  In those days, shows were not recorded, so I had no idea what our performance looked or sounded like, but my parents said that cameras were on me quite a bit.

"Why were you looking up all the time?" my father asked.  "I don't know," I said.  I didn't tell him that I thought it would make me look tough and cool.

So now, I thought, I was famous.  I'd been on television.  We played youth club dances.  What more could a young hillbilly want? 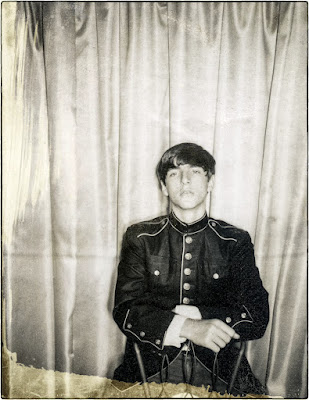