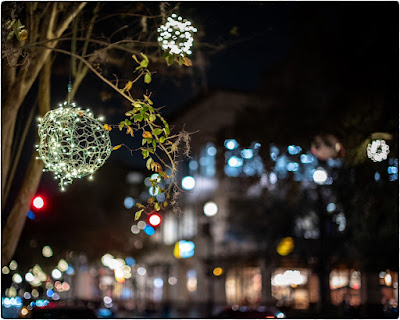 I've been having trouble sleeping lately.  My bones hurt, my knee throbs, sure. . . but it is something more dastardly, I fear.  I'm sure, though, that the bones contribute.  In an effort to combat both the aching in my body and the "unnamable thing," I've taken to thoughtful stretching, breathing, and meditation.  Call it whatever you want.  It is a hybrid of my own creation.  In "popular parlance," I'm trying to (re)connect with my body.  Holy shit--I may be ready for the talk show circuit.  I'll have them drooling.  But it's true.  The mind/body thing, as every good athlete knows, is real and something that must be worked on.  One of the things that superior athletes do is slow down time.  Call it concentration, call it meditation--hell, call it Fido if you want--but they work at quieting the mind when things are moving quickly, when things are seemingly chaotic.  When I raced sailboats in the Lipton Cup (we won the series), the fellow who drove the boat, an Olympian, told me that when the halyards were loose and the sails were flapping and when the waves broke over the bow as we tacked the boat in heavy seas, I would need to "quiet" my mind.  It was easy for me, of course, as I was focused on not puking.  But you get the idea.  Michael Jordan said that when he was "in the zone," the basketball rim looked so large there was no way he could miss.  O.J. Simpson, the great football criminal, said that when he was in the zone, everybody seemed to be moving in slow motion and the openings created by the line were so big he could just step through and run into the open.  And one of baseball's greatest hitters (whose name I can't bring up right now) said that when he was in the zone, the ball looked so big he could count the threads as it left the pitchers hand.

Those are just a few examples of jocks doing "mystical" things.  For those of you interested. . . (link).

When I was at the factory, we had a biofeedback lab.  They had all sorts of machines to measure your brainwaves, but the easiest test of how much control you had over your body was a finger thermometer.  You sat still and concentrated on lowering the temperature in your extremities.  There was a little bell that would ring as you did.  You were supposed to concentrate on making the bell ring.  Everyone could do it, just to different degrees.

So now I'm getting back to my old Gwyneth Paltrow Hippie self--(Sky disputes me on the "hippie" part of Paltrow, but I'm sure she's wrong)--and concentrating on healing some of my "things."  It isn't easy, at least at first.  And it is time consuming.  This shit doesn't work at internet speed.  It takes time. . . lots and lots of time.  But, you know. . . what else do I have?

None of that is what I started out to tell you, though.  I've become too routinized by the years of being alone in the house, and I have been telling myself to change the routine or break it altogether.  That might not be advisable, though, for some routines are ritual (ritualized, perhaps) and transcendentally sacred (sanctified?).  A simple thing it is, though, to leave the home after dark.  I mean. . . holiday lights and all.  Last night, I did.  I had been productive, had done things early, and thusly, the day seemed long.  I went to my mother's earlier than usual and was home before the setting of the sun.  Foregoing the usual cocktail, I tried recording a couple tracks of me bellowing and butchering the guitar on my Mac using GarageBand.  Oh, god. . . I was awful.  You know, stuff takes practice.  There may be an important natural element to it (like having a good set of pipes), but there is also the training of the muscles, the phrasing of notes, the fingers upon the wires.  I tried to master four lines of a song.  That was all.  Over and over.  And it got better. . . but never good.  If I practice those four lines for a week, though, I'll bet I could make something that wouldn't embarrass me.  What the hell.  I may try.

I prepared a little meal after that, and ate on the deck at what would normally be my cocktail hour. 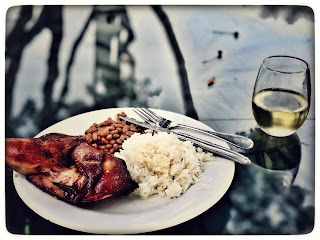 And when I was finished, not having had cocktails and not feeling lazy, I decided to take my Leica M10 and the 50mm f.9 lens I bought a while ago but have never really used out to document Christmas on the Boulevard.  It was just a nothing way to get out of the house.  I parked my car at the far end of the street and limped my way up and back.  That lens is tremendously difficult to focus, but when I got home, I was amazed at how many shots were sharp.  Ho-ho, the holidays. 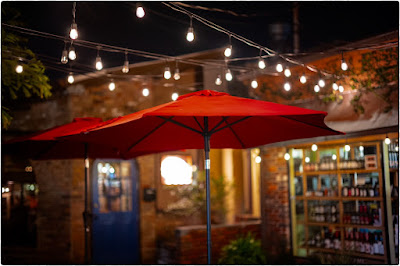 I'll save some for future posts, but I might go out to a different part of the county to shoot.  You know, more "people-less things" in the world.

Dawn is just breaking a brilliant pink which is in keeping with the old saying, "Red sky at morning, sailor take warning."  We are supposedly in for some severe weather today, the remains of the front that caused so many tornadoes through the south yesterday.  And I, being a champion sailboat racer, will take heed and accomplish tasks early.  When the weather turns nasty, I will go back to recording my musical masterpiece--if I can figure out the technology.  And, of course, I will go in for some stretching/breathing/biofeedback healing.