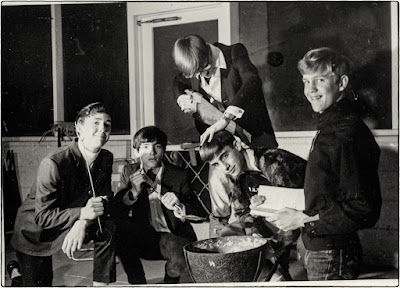 I just sat for far too long writing the crappy tale that follows.  Start, stop, start, stop.  I was interrupted too many times for any hope of flow or grace.  Still, I will post it.  If I ever take all the parts of this adolescent narrative and try to put them together, I will, of course, rewrite it.  For now, it will be a note for further development.

But the photo is cute, right?  It would be better if all five of us were dressed as mods, but we were poor kids.  You know which one is me, don't you?  The cutest one?

I just wanted to leave my daily narrative alone today.  Things are better, but I am still feeling fragile, glued back together but not yet dry.  I had multiple invitations out last night, but way led to fucked up way and I spent the night at home alone.  It was o.k.  I had a fairly productive day.  As I say, I'm on the mend, one of Fitzgerald's chipped plates from his "Crack Up" essays.  Still serviceable for a late night snack.

O.K.  Read the rest of this if you want to, but I'm telling you, it is not very good.

My parents didn't have a lot of money, and they were frugal.  At the beginning of the school year, they would take me to Montgomery Wards (Monkey Wards to my father) and buy my clothes for the year.  The pants, as I remember, were either black or green or tan.  And there would be shirts, shirts like all shirts.  I would never get enough outfits, though, and I would need to rewear some once during the school week.  But band life was changing all of that, and as the first year of junior high rolled on, I began buying some of my own clothing.

Fashions were changing.  It was an ideological thing.  The conservative kids in school wore traditional clothing.  If you were going to rise to the top of the hierarchy, there were brands you had to have.  Gant shirts were a must.  If you were popular, girls would be after your "fruit loop", that little loop on the back of the shirt that allowed you to hang them up in a locker.  London Fog jackets were mandatory as were Hanes slacks and Bass Weejuns.

I had none of that, but Carnaby Street fashions were changing the rules.  The conservative kids parents weren't buying it.  Trimmed hair neatly combed and the corporate look were still the rule.

At that age, if one wanted to get anywhere, one walked.  For miles.  Sometimes, I'd walk five miles to get to a place.  Undeniably, there was a five mile walk back.  But the older guys I knew taught me to hitchhike.  It was easy for a young boy to get a ride.  There was a new mall far away from Crackerville in the rich part of town.  One day, Mike (the kid on the far left of the photograph) and I went there to hang out.  It was he who taught me that I could buy my own clothes.  We were in a Penney's department store, and as the times were changing, there was a lot of Mod fashion.  Cheap, too.  We bought a few paisley shirts and a couple of madras, too.  Allowance money.  I got some hip hugger slacks with the wide belt loops to accommodate the new wide belts that were in fashion.  And somehow, I talked my parents into buying me that pair of Chelsea Boots like the Beatles wore.

All of this had consequences, of course, not just with my classmates but with the teachers as well.  Some of the female teachers liked this new sense of rebellion, especially the ones who taught English.  Coaches and history teachers, though, were another matter.  My gym teacher was an Irish ex-Marine.  He was also the swim team coach.  One day I was walking with Jerri, a very pretty girl who was on the swim team, and after we went different ways, coach caught up with me.

"I don't want to see you walking with Jerri again.  I mean it.  Stay away from her.  Do you hear me?"

My head was spinning.  What did I do?  What had I done?

He wasn't the only one.  Mr. Hutchinson was another of those Sansabelt types, young enough to still think he was cool.  He hated me no matter what I did.  One day in class I was chewing gum.  We were not allowed to chew gum at school.  I was doing a required writing assignment when Hutchinson came up behind me and lifted me out of my seat by my hair.  My head was sore for days.  It was the last time I took that shit from him, though.  One day, he sent me to the office for giving another kid the finger.  My father had to go to the school to talk to the principal and Mr. Hutchinson.  Most of us had some pretty rough fathers.  You didn't really want them taking off from work to come up for a conversation.  After that, Hutchinson's attitude had changed.  He didn't like me any better, but he left me alone.  I guess my father hadn't liked the sissy fucker any more than I did.