Poor Side of Town 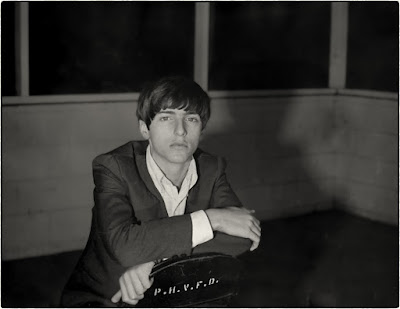 The school year rolled along.  Toys were put away.  There were girls.  There was music.  And everywhere, there was conflict.  Both Frank and Nancy Sinatra had songs in the Billboard Top Ten.  "Strangers in the Night" was less popular, though, than "These Boots Were Made for Walking," a harbinger of things to come.  We all watched "The Monkees" and "Batman" on television, but the evening news was filled with images of the Vietnam War and Civil Rights Marches.  Magazines like Life and Look filled pages with photographs of hippies either protesting the war or dancing ecstatically at concerts and in city streets.  John Lennon declared that The Beatles were more popular than Jesus.  "The Bible" was the year's top grossing movie, but there were also films like "Alfie" and "Georgie Girl."  I saw Antonioni's "Blow Up" and wanted to be a photographer.  My mother, much to my dismay, began dressing in hipper clothes and there was trouble brewing between my parents.  The kids in the neighborhood didn't play games in the streets as much, and I began to wander about on my own.  There was a newsstand at the shopping center that had pinball machines and sold Coke Slurpees.  It was the place where many of the older toughs hung out.  The lady who ran the place would sometimes sell them cigarettes and we would smoke.  At the end of the sidewalk there was a pizza shop that sold pizza by the piece for a dime.  I was still required to go with my parents on weekend outings, to stock car races or bowling, but often now, they were willing to leave me home alone which was glorious.  An only child, aloneness was my natural state.  I had never been toughened by sibling life.  My life was quiet on the inside and gentle.  I was a natural romantic and abhorred injustices.  At school, the kids made fun of a girl who was overweight, poorly dressed, and wore coke bottle glasses that made her eyes look monstrous.  She had become a meme.  In class, the desks around her were the last to fill.  I would often take a seat by her.  I was an advocate of kids who were ridiculed.  I stood up for one who was being picked on by a bully and became the unofficial Champion of the Undesirables.  I didn't want to be, but it was somehow inevitable.  However, I was being pulled in another direction, too.  Because I played in bands with older boys, I was traveling away from childhood more quickly than many of my peers into a darker, more dangerous world.  I stood watch for boys robbing coke machines at the twenty-four hour laundromat.  I learned to steal the returned bottles from the racks and cash them in at the grocery store for two cents apiece.  Five would get me either a piece of pizza or a game of pinball.  A new pool hall opened up at the shopping center.  That is where the older kids often hung out.  That summer between the seventh and eighth grade, I was with Tommy mostly, the kid down the street whose sister had given me my first French Kiss.  His sister had bleached his bangs blond that year.  His stepmother bought us copies of Playboy saying, "Don't tell your father."  I kept them hidden under my bed, and while the pictures were the sell, I read the magazine from cover to cover discovering evidence of a life outside anything I had ever known, a life of art and literature and sophistication.  The magazine was outspoken and liberal, and I. . . I lived in a wasteland.  I was hanging out with Wayne and Steve more, too, leaving the nice boyband behind for something edgier.  Steve knew an old man who would buy him quarts of beer if he gave him money for his own beer, too.  Wayne and Steve would take the quarts of beer into the middle of the fields surrounding the Boys Club and get drunk.  I tried, but I didn't like the taste of beer and constantly dribbled mine from the bottle onto the ground to make it look like I was drinking.  Eighth grade was coming, and we would all move up a rung on the hierarchical ladder.

My heart felt perpetually full, and I was constantly in love, not with a particular person or thing but with the idea of love itself, I think. Walking alone across vast expanses or listening to music alone in the night in my room, I felt a constant longing. . . for what?  I didn't know.  But I knew somewhere something was out there for me, idealized and beautiful, and I was determined to find it.