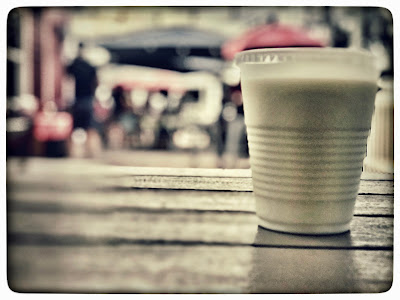 As I try to put together my serial about my adolescence, I necessarily ignore the present.  It is difficult to write everything at once--old narratives, the daily journal, op-eds/opinions about the failures of the contemporary world. . . .  But, you know, life is full of surprises if you keep your eyes open.  Let me see what I've missed of late.

I woke with a tremendous hunger yesterday.  And a terribly runny nose.  It was not a cold or flu, I think, though my mother had warned me off coming near her on Saturday because she felt sick.  Allergies, maybe, which I seem to be developing as I age.  I blew my nose all through my morning ritual, after which I decided to go out for a decadent breakfast--three eggs, thick bacon, cheesy grits, and rye toast.  The beverage was the question.  I'd already had a pot of coffee.  Mimosa?  I settled on a big glass of milk to boost my breakfast cholesterol levels.

Sure, I took a phone picture of it.  Gotta keep the art alive.

My nose ran all through breakfast and my nose and eyes began to itch horribly, so when I got home, I took an allergy pill.  And that was it for the rest of the day.  I was out.  I'm a real wimp when it comes to drugs, and whatever they put in allergy pills really f'ed me up.  I went back to bed and didn't get up again until two.

Since my mother had been sick the day before, I told her I would make some chicken soup for Sunday dinner.  When I looked at the clock, I realized I'd barely have time.  Numb from head to foot, I got dressed and drove the the grocery store.  Back home, I washed the chicken, chopped the carrots, celery, onions, and garlic, and got everything into the InstaPot.  It was three-thirty.  I set the pot to pressure cook for an hour and decided to take a hot Epsom Salts soak.  With a glass of wine.  Twenty minutes later, I slithered out of the tub and into the shower.  By the time I was finished beautifying myself with creams, unguents, and ointments, it was getting late.  I bled the pressure cooker of steam and pulled out the chicken to debone, added the noodles, turned the pot back on and called my mother.  I was running late.  I was afraid I had added too much water to the chicken and wine stock and felt sure the soup was going to be a bust.  And. . . I was as limp as those noodles in the chicken soup.  Maybe a hot bath with wine hadn't been the best idea.  I was moving slow.

At mother's, we sat and talked while Christmas carols played in the background.  We tried to remember old Christmases.  I tried to remember what gifts were given and received, but oddly, only the toys of my childhood came to mind.  Adult gift giving has never been my strength.  My mother gave me my first color television long, long ago, and she gave me the television I have now.  I've given her cell phones, Apple computers, multiple printers and scanners, iPads and Amazon readers. . . .  Still, we remember the food more than the rest.

When I got home, I thought of all the holiday madness I had anticipated on having.  I had begun fairly well.  Multiple gatherings with friends from the factory, several train trips to both the Factory town and to Grit City.  I met the gymroids out a number of times, too.  I had lunch with C.C. and have met others for a bite as well.  That is a busy social calendar for the likes of me.  But somehow, I have crashed and burned.  I thought to celebrate by myself, but the last three times I tried to go to my favorite bar, it has been closed for private parties.  That happened both Friday and Saturday this week.  Saturday I kind of gave up, went to the grocery store, and made a dinner of Amy's Organic Mac and Cheese and a can of wild caught tuna.  A bottle of wine and t.v.  I stayed away from a Friday party in Grit City and, feeling the effects of my big Drug Sunday, didn't go to the factory party at my old bosses house last night.  I had told some people I would be there, but my holiday drive was gone.  Earlier, on my way to my mother's, I passed the neighborhood party, the streets blocked off and lit, tables filled with food, everyone wielding their own drinks.  I used to love to go, but being solo. . . I don't know.  Walking around talking to neighbors without a loved one on your arm just seems sad.

I was expecting some texts from the company gathering complaining of my absence, but I overestimated myself.  There were none.

This week is busy.  My mother's birthday is Tuesday.  The cleaning crew comes and I have a beauty appointment, too.  Today I need to pick up some flowers, a card, and a cake as well as some small gifts.  I will take them over early morning before my mother goes to lunch with her friends, then I will go for my daily visit in the late afternoon.

As for the rest of the holidays, though, I am at a relative loss.  The Ghosts of Christmas Past, Present, and Future may come to haunt me.  I have been here/there many times before.  Perhaps the phone will ring.  Maybe it won't.  There are still two weeks of holidays before Christmas.  I'll try to avoid heavy allergy drug use and perhaps be blissful once again.  Still, you know, it might be good to avoid the crowd.