A Bit of Beauty 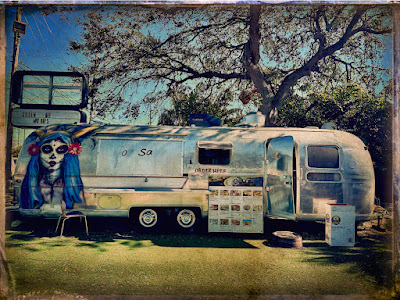 Yesterday was another of "those" days when the sun is shining, the air is cool, everything seems new, and you are inspired with a heartbreaking sense of wonder.  It is its transitory nature that makes it both wondrous and heartbreaking.  If only one could only bottle this, you think.  But you know that ahead lie cloudy days, stormy days, days full of heat, rank humidity, and terror.

My buddy picked me up at noon.  We drove to a part of town that is not beautiful or wondrous.  In the rear of an old strip mall, a building, once a Goodwill store, we pulled into a parking lot.  Maya, the place was called, and I assumed it was named after the owner.  In the lot was a silver Air Stream set up to serve Mexican dishes. My first thought was, "Really?  An Air Stream?"  I mean, you might be hard pressed to find a more expensive food truck.  But they are beautiful, right?  Who hasn't had the fantasy of buying an Air Stream and traveling the U.S.?  Until you look at the price of the things.  Then you start thinking Jayhawk or one of those other cheap travel trailers that have none of the aesthetic appeal of the Air Stream and you just forget about it altogether.

I took out my brand new iPhone 14 Pro and snapped a photo.  Nobody yelled at me or asked me what I was doing.  Bonus!!!  But I have read that kids today are into old four to ten megapixel digital cameras from the aughts.  They like the "vibe."  Cell phones are just too. . . something for them.  If they take photos with cell phones, they like the older iPhones like the 6.  I'm down.  That's cool.  The whole resolution/pixel thing has never been my interest.  No matter what I use for a camera, I have to muck it up to be happy.  I don't want to emphasize the flaws in life.  Nobody wants to see your pores.  But/so my new iPhone is a tremendous leap down from my expensive cameras.

And yet. . . I still yearn for a new digital Hasselblad.  I'm a dichotomy locked inside a paradox.

Inside, the cafe was full of murals. 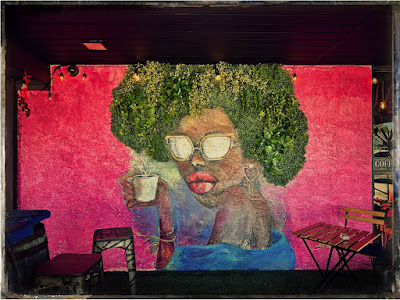 Even the eclectic furniture was painted.  I understood why my buddy liked the place.  It was a bit like sitting in a cafe in one of the many countries he has visited with little of the mundanity of home.  The large wait staff was mostly Hispanic, and our pretty young waitress spoke English with a heavy accent.  I tried speaking Spanish in return, but I think I was mostly not understandable.  My buddy corrected my pronunciation as he is much more fluent, so I returned to my native hillbilly. 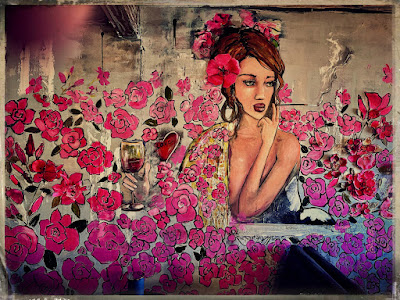 Now I am assuming much, but there was a woman in the cafe who seemed to be the proprietress.  As she walked by our table, she smiled and said hello.  I turned and looked at a mural.  Yes, it seemed to be her.  My friend has certain proclivities.

That is my finger in the upper left side of the frame.  There are some design flaws in the camera of the iPhone that I still am not used to.  The lens is on the wrong side of the phone, I think, if you are right handed.

Sure, sure.  But it doesn't feel right.

We sat and told tales of adventure and daring to one another, each of us being well-travelled, but my buddy has admittedly done much more than I, and I am envious.  We were to travel together to Africa years ago when we got f'ed over by our dead ex-freind Brando, and as a result, we have never travelled together which means we can tell whatever lies we wish, but, I think, neither of us needs to exaggerate.  We've each experienced wonders that will never exist again.  The past is really just a beautiful lie anyway. By and large, it is all a selective invention.  It is how you live through the illusion, however, that matters.

He and I, I think, have done it pretty well.

The music was of a kind, and I recorded a bit of it and texted it to my New Old Friend to share the wonder of the day.  I mean, what good is living large if others do not know?  It was the sort of emo music we both enjoy.

"It's probably one of those internet stations," my buddy said.  "Ask them what it is."

I did, and then I sent the Spotify reference to Sky.

Back home, mid-afternoon, the weather even more gorgeous than before, I regretted the need to take a nap.  But it was luxurious.  When I woke up, though, it was time to go to mother's.

Often, when I get to my mother's house, she is sitting with neighbors.  It is funny but sweet that the neighborhood gathers in old chairs in my mother's open garage.  From there, however, one has a view of the world.  Like me, my mother does not like to sit inside, and especially alone.  So for a bit, my mother's garage turned into a mini-party of aged neighbors.  Everyone was excited.  The 98 year old woman next door who is almost deaf and lives alone had just gotten a new phone for the hearing impaired that transcribes the conversation on a big screen.  Why this had not happened before is a mystery to me, but it was now the talk of the neighborhood.

Such are the parties in my mother's garage.

When everyone had left, I gave my mother a back massage across her trapezius and upper spine.  I could feel the knotted muscles under my fingertips, but I soon had massaged them away.  There is nothing like a little free acupressure, is there?

I left while the sun was still up.  I didn't want to go home and sit alone.  I didn't want to cook.  I wanted to extend this day as far as I could.  I'd looked up the cafe to which we were going before my buddy picked me up that afternoon, and, as it will, way led to way and I was reading reviews of new and spectacular places that were popping up around town.  There was a new Cuban-themed bar in an interesting part of town that sounded great.  Drat Dry January.  But there are a slew of new restaurants opened by chefs of no small repute of which I was unaware.  Indeed, some of them I cannot afford.  The trend is to open up a small place that seats between eight and twelve people and have one serving each day.  My adventurous friend from the factory went to one of them, a place that has a Michelin star and is housed in a crummy building on a weird strip of highway.  $400 for a sushi dinner.  Yup.  I'm curious.  But, times being what they are. . . .

Other places though, are noodle shops and pho restaurants, and I am bound to go.

Last night, however, I just wanted to sit at the tiny bar overlooking the brick street through huge open windows at a good Italian place, and I thought that I would need to beat the crowd.  I got there just before sunset and found both a close parking space and an open seat. 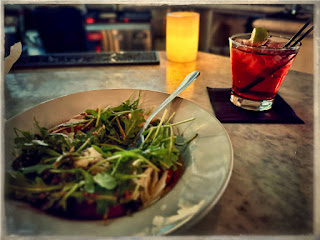 Have I mentioned how stupid Dry January is?  I ordered a cranberry and soda from the prettiest bartender in town.  It's o.k. because she is disdainful and mean and I am absolutely certain on megadoses of psychiatric meds, but, you know. . . who with an adventurous heart. . . .

An arugula salad and chicken piccata later, I limped back to my car.

Home alone, I checked my messages and meandered through some pictures Sky had sent of her incredible NYC editorial fashion years when she was traveling around the globe on the company dime.  Travel tales, romantic places.  It had been that kind of day.

Unbelievably, today looks to be as beautiful as the two prior.  My God, it is overwhelming.  But I have duties today that will keep me from adventuring for long.  I guess I'd better get out early and suck up as much of it as I can.  Such a party.  So many gifts.  Dread seeps in with the knowledge that it will eventually come to an end.  The cake will be gone and the guests will have left.  But damn. . . some days you think you might live forever. 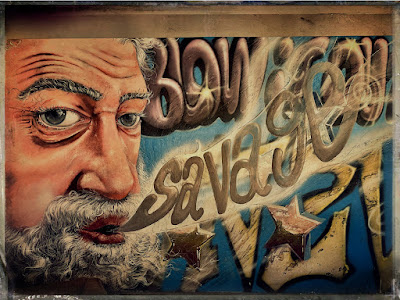