Hemingway Called It the Black Ass 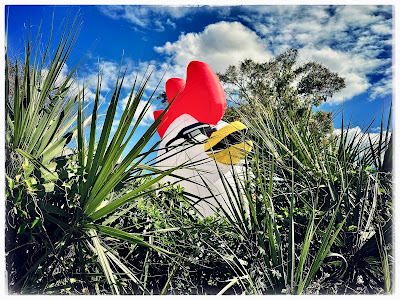 Sunday was another of those near-perfect days.  And so it will be for some time.  So. . . why, in the midst of Paradise, must I break down?  Why?

A friend came into town to run in a marathon.  She does that.  A lot.  I don't know why.  I ran one once.  I can't imagine wanting to do it again.  However. . . she stepped into a pothole and fell.  In trying to break her fall, she broke her hand.  She asked me to meet her at the good restaurant just a few blocks from my house.  Of course I would.

She was with another fellow from the factory.  She and I are both doing Dry January which we both deem stupid, so our compadre was not drinking, either.

"Are you doing Dry January?"

He was lying, though.  He's just spent three days at a gambling casino losing his shirt.

I got to the restaurant after they did.  She was drinking a CBD mocktail which she said was good, so I ordered one as well.  And it was.

"Oh, God, I miss me some C.S." my friend exclaimed as I subtly asked the waiter for another hit of acid.  He dropped a glass on the floor that loudly shattered. 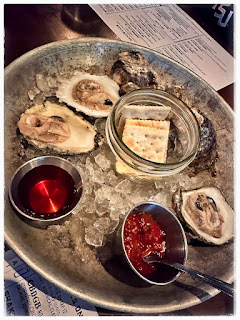 The day, bright and cool and blue was constant.  I had been cooking little red beans and pork all day.  The house smelled of it.  In the late afternoon, I took it to my mother's house.  When I walked in, of course, she was watching some Western at full volume on a commercial channel.  She is going deaf all of the sudden.  She doesn't hear me well when I talk to her now.  I put on some rice to cook and told her I was going to go outside.  I just couldn't take the noise.  She followed me.  So we sat in the late afternoon watching the bright day darken and feeling the cool air become chill.  I told her about my New Old Friend breaking her toe and my friend in town breaking her hand.  I told her about the tenant's trip to the E.R, her broken foot swelling and discoloring to the knee.  Human frailty and suffering abound.

My pork and beans were disappointing.  There just wasn't much flavor.  I should have used a red wine instead of a white for cooking, I think.

Much later, when I got home, I was zonked.  I was physically tired, but it was something else as well.  The last three days had been grand, and I had tried to live up to them as well as I could, but sitting in the house alone in the silence, the old thing came back to bite me.

Life is grand and good and wonderful, but it is also a pathetic tragedy, too.  We like to think we can control it.  We try to make good decisions.  We try to be interesting and ethical and kind.  We read and we study and we learn as many things as possible.  We love literature, music, and art.  But then, tired, alone in the cosmic void. . . .

Is it merely chemical?  Of course, it is in times like these one understands the function of "therapists." You can't tell this shit to a lover or a friend.  They can't help you, and it only causes them pain and confusion.

So, although the therapist can't really help you anymore than distracting yourself with fun and drink, they help your friends and loved ones who are spared hearing your mealy whining.  Yes, therein lies the value of all that, I am convinced.

So. . . I ate a pint of Ben and Jerry's chocolate fudge ice cream.  I thought maybe that and a good night's sleep would help, but it didn't.  The heaviness of "things" still burdens me this morning.  WTF?

I will go to the gym in a bit and hope to shake it all away, these feelings of sadness and lonesomeness and doom.

But just maybe it is Dry January.  Normally, if I was feeling down, I would have a couple scotches to level me out.  I could have used a couple last night.  Maybe I am just now experiencing withdrawals after nine days.  Ha.  That is not possible.  But the coping mechanism, you know, the "cripple's crutch" or whatever the Do Gooders might call it. . . .  I don't know.  I've gone more than a month without drinking before and only experienced boredom, not despair.  No, I have some other issues that have been thrown upon the fire to fan these flames.

I mean, I'm still limping painfully for Christ's sake.  Surely my problem is a lack of adequate aerobic exercise.  In my life, when I have felt down, I have always put on my running shoes and blown it all out.  Running was always my meditation and my therapist.  It is hard to think abstractly when you are searching for oxygen.  The chemicals in the brain change, too.  Endorphins, serotonin, dopamine, oxytocin. . . .

I just looked up what, other than exercise, helps to stimulate these chemicals.  Maybe I should listen to more upbeat music.  Maybe my emo music is bringing me down.  I don't like comedies, though, and I have no one to cuddle with let alone with whom to make love.  I do meditate, spend time outdoors and take naps.  Maybe I should go for a massage.  That's supposed to help.  I'll bet one with a happy ending would put me back on my horse.

A friend has strongly suggested getting a puppy.

But really, I think it is just the overwhelming human suffering about which I can do nothing that has me down.  That and life circumstances that are way beyond my control.  Hell. . . maybe I just have control issues.

I don't know.  I thought we were romantic heroes, tragic, maybe, but not pathetic.

Well. . . I want to thank you for this session.  You know, it is good to get this off my chest.  If you have any life suggestions after reading this. . . don't send them.  Keep them to yourself.  There is nothing more irritating than advice you are not paying for, right?  I want the most expensive advice I can get.