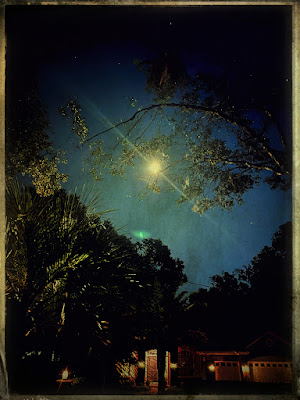 Looks like CNN/MSNBC lost on the House floor last night.  They were sure they "had 'em" this time.  It was fun.  McCarthy was going to go down in history as a humiliated moron loser.

Erin Burnett's smug victory might be that at the very least, McCarthy didn't get voted in on Jan. 6.  I mean. . . it was past midnight.

I wasn't up.  I'd already gone to bed under the Full Wolf Moon.  And what a moon it was.  It was really a dumb-assed time not to be drinking.  And yet. . . I'd had a most wonderful day.

It began with a morning call.  Sky was eating soup and quiche for breakfast at a little cafe.  Are these the kind of friends I have, I wondered?  People who eat soup for breakfast.

Of course it is.

It was early but I had slept late, if that makes any sense, and so, rested by a good sleep after two nights of wakefulness, I looked through the window at a most beautiful day.  I'd slept late enough and talked long enough that I was "late" for the gym.  I can't be late, of course.  I have no schedule.  But I was getting texts from the gymroids.

When I got there, the fellows had finished their workouts.  Talk, talk, talk.  The group is growing in numbers.  Maybe forty-five minutes later, I touched my first weight.  I did not work out for so very long, though, still practicing my holiday routine, and within forty minutes, I was out lying by the pool.  It was one of those wonderful and brilliant days when the air is cool but the sun is warm.  I'm not a "tanner," however.  Ten minutes on one side, ten on the other.  One of my neighbor ladies, quite the athlete, was also lying poolside.

"What's the matter, were there no open lanes?" I grinned.  There were plenty.

"The water was just too cold," she said.  I lay a couple chairs away so that we would not have to engage in constant talk.  Nobody wants that.  I just wanted to zone out and chill for a bit while my body made some vitamin D.

Back home, I showered quickly.  It was a sidewalk cafe kind of day.  I wanted sushi on the Boulevard. 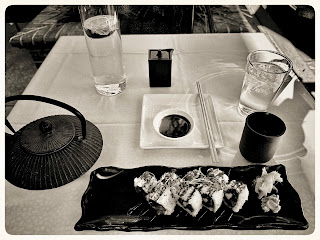 The air was still cool, and the light was magnificent.  The day was like a perfectly cut diamond, sharp and beautiful and of great value.
As I ate, I got a text. 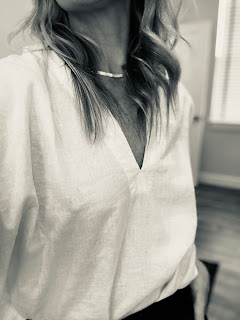 I'd been sending her the b&w lunch pics.  She always be trying to outdo me.  Ha!
More picture texts came in.  WTF was that?  Wait.  What?  It was some fat man eating sushi on the sidewalk.  Then another.  O.F.  It was me!  I looked around.  There was my gym buddy, Tennessee, laughing.
"Jesus, man, how'd you get me in that fat suit?"
The shift at the sushi place was changing.  One of the waitresses came over to the table to chat.  Tennessee introduced me to her.  He loves to think that the women are about him, but she looked at me, crinkled her nose, and winked.
"Yes, I know him.  I haven't seen you for awhile."
There must have beens something wrong with his camera.  Seriously.  He must have a "fat lens" or something.  Maybe it was the shirt.  I'm not going to wear checks anymore.  Something.
"I've been cooking," I said.
Tennessee stayed a long while, and then we got up to walk to out respective cars.  On the corner where we would part, we stood and told tales.  For a very long time.  The same cop car came to the intersection five times.
"He's checking us out," said Tennessee.
"You're not used to it," I told him.  "Hang with me and you will be."
By the time we went our separate ways, I was already later than usual for visiting my mother.  She was eating a bowl of soup when I got there.  By and large, I guess, it was a soup day.  I, however had decided to cook a frozen pizza topped with avocado, peppers, and fried eggs.  And beer.  Wait, no. . . .
Dry January is a stupid idea.  It was Friday night.  I wasn't going out to drink club soda in a bar alone.
My travel/art buddy texted me a photo.
"Looks like a full moon," he said.  He asked me if I knew a little cafe that I had never seen before.  He said he would take me there today for lunch.  "Deal," I said.
I went outside with my phone to make a picture of the moon.  I sent it to Sky who I believed to be out drinking cocktails and enjoying the attentions of an admiring crowd.
"Look up.  It's a Full Wolf Moon."
Q texted.  It was his son's 11th birthday. "Wow," I said.  I remember when Q was 11.  Almost, anyway.  "Look up," I said, sending him a photo, too.
Sky texted back.  She was not out and howling, she said, on this most beautiful night after all, but she would still look up.
I am re-entering life, it seems, doing "things" I haven't in years.  It had been a wonderful day full of nothing, but full.  After the Great Fall, can they put Humpty Dumpty back together again?  That someone is attempting to feels good and fine enough.
"Positive Energy Only," she says.
Indeed.
Bedtime was nigh. I cleaned the kitchen, set up the coffee pot for morning, took my vitamins, turned down the thermostat, and turned off the lights.  I would see what la luna had in store for me this time 'round. 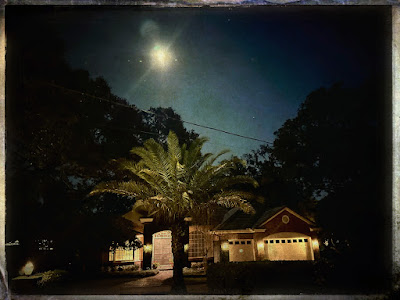