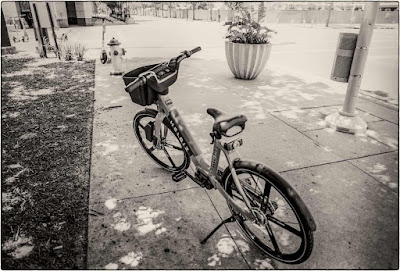 Despite coach's disdain for the likes of me, I got to play fullback in our second game.  Coach was a lunkhead, and he thought lunkheads made the best football players, I think.  Such was our quarterback.  I don't know if the kid could read, write, or do simple sums.  I mean, he was dense.  I, however. . . .

It was a Friday night game at the high school field, a game "under the lights."  My parents came.  They would get to see me play.  The stands were crowded.  The cheerleaders were cheering.  The band was set to march at halftime.  We were the home team.  It was everything a kid could hope for.

Early in the game, I hadn't touched the ball yet, and I was anxious to show my stuff.  I was watching the defense overplay the motion of our offensive line early on.  I told the quarterback this as we stood on the sidelines while the defense was on the field.  I said we should call a play where everyone went right while I ran left.  He would stop, lob me the ball, and I should have an open field.  So, dunderhead told coach he had an idea for a play.

We got the ball back around the fifty yard line.  We were going to run the play.  Dunderhead called it in the huddle and we lined up.  And sure as shitting, it worked.  Everyone blocked right as he faked a handoff to the halfback, then he spun and lobbed the ball to me.  And holy smokes, the whole sideline was open all the way to the end zone.  I took off.  Only something weird was happening.  My legs started to tighten up.  The lights of the stadium seemed to get brighter and bigger and began to swirl.  The sound of the crowd receded into the distance.  The playing field seemed to get longer.  I saw the other team's safety running at me.  He couldn't catch me, I knew.  I could have run down the sideline and beat him to the end zone but my legs were getting tighter.  In the distance, far, far away, I could hear the crowd getting excited.  I thought I could hear my father cheering.  My brain was locking up on me.  I couldn't think.

I was scared the safety would catch me.  He was like a magnet.  I turned and ran right toward him.  He tackled me on the twenty yard line.

Coach pulled me from the game.  The play had been my idea, but he didn't know that.  He just looked at me like I was a moron and shook his head.  I took a seat on the bench.

We didn't score on that drive and lost the game by a lot.

Next week, coach moved me to defense.  I was playing middle linebacker now.  I was sick about it and mad, too.  In practice, I made stop after stop in the backfield.  I was good at drawing lineman offsides.  I was heralded by the assistant coach.  O.K. I thought. O.K.

In the next game I got three fifteen yard facemark penalties and was benched again.  I don't think I did it, but maybe.

Steve was sixteen now and had dropped out of high school.  He was going to get a GED.  Tommy, who had not progressed well, quit going to school in the 8th grade.  He wasn't old enough to drop out yet, but when he would officially when he turned sixteen.  Tommy had moved from his father's house down the street to live with his mother in a trailer park with his younger sister and brother and stepfather.  One of his new friends there had a lead on a job selling magazines with a company based in Boston.  He, Steve, and Tommy signed on.  They asked me if I wanted to join the crew.  I said I would but I couldn't until after  football season.  If I wanted the job, though, I needed to come to the downtown office to interview.

I went to coach's office one day and told him I would have to miss practice to interview for a job.  He said I couldn't.  Of course, I went anyway, and the next day he said I was suspended for a game.  I practiced the rest of the week half-heartedly.  We were not really a good team.  Our record was 0-4, and some of the tougher guys who weren't getting to play were quitting.  I decided that I would quit, too, and the next week, I was out selling magazines.

There were two young fellows with DA haircuts and shark skin suits who drove us around to what they called "bunny hutch" neighborhoods.  These were poorer neighborhoods where the houses were built close together.  We could hit a lot of houses quicker that way.

I learned the pitch.  I'd knock on the door and say, "Hi, I'm C.S., one of the boys from the neighborhood, and I was wondering if you could fill out a survey for me."  I'd hand them a card with checkboxes next to a list of magazines.  "If you would, just check off some of the magazines you might pick up in the laundromat or the doctor's office, not magazines you get at home but something you might read."

Now many times they would say no thank you, but often enough they would fill out the card.  When they handed it back, I would say, "Thanks.  See the reason we're doing this is that we have a special.  For only pennies a day, less that the price of the sugar on your table. . . . "

If they were interested, I would let one of the sharkskin suites know, and he would go back to close the deal.

Football season was almost over, and so I went with a bunch of the boys who had quit the team to see the last game.  Coach had run out of options and run out of players, so the "subs" were finally getting to play, and these guys ALMOST won the game.  We shouted and screamed for the fellows playing for the first time all year.  We felt somehow vindicated.

In the end, though, the kids just couldn't pull it off, and the team ended up losing every game of the season posting a record of 0-6.

We may have been petty, but we felt vindicated by that, too.