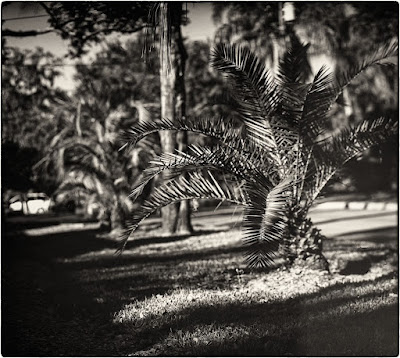 Here's my latests!  I took this with the Liberator yesterday in order to have four negatives to develop in the tank.  Awesome, right?

But you know, it's in focus.

I have focussing issues it seems.

The photo I took of the factory kids was in focus as well.  One of them, anyway.  One was way off.  But there was a problem.  I thought I was shooting one film but was actually shooting one much, much slower, so development was way off and the negative was thin.  I was able to scan it and pull an image, but there were many problems with it.  Still, it was a nicely composed large format pic and the factory kids liked it. I promised to bring the monster with me on the next outing with full knowledge of what I was shooting.

Yesterday was a misery, though.  Sick.  Very.  I'll spare you details.  I'm not completely out of the woods yet.  Today will be a test.

This is when living alone is a double-edged sword.  I don't want anyone to see me sick, but I want someone to provide love and comfort, too.  You can't have it both ways.  And such is the condition of my living solo.  There are great benefits and sad contras.  We all die alone, but nobody wants to, I imagine.  Die, I mean.  As I quoted before, nobody wants to be here, but nobody wants to leave.

I need new bedding.  I need a lot of things, but this is one.  A new mattress, new pillows.  I've thought about buying one of the hotel chain's bedding.  The Hyatt or the Four Season versions.  Maybe even Hilton.  I thought to ask Sky who has slept in the better hotels all around the world.

She was of no help.  She sleeps on one of those mattresses that comes in a box.

"I like a firm mattress.  When I was in China, every bed I slept on was hard.  I slept well."

"That's another reason we could never live together."

She is making an encyclopedia of reasons.  She's a very smart woman.

If I remember correctly, though, I liked the pillows and mattress at the Four Seasons best.

Fascinating post so far, right?  I may ask ChatGPT to start writing my blog.  Apparently it is better at it than most people in the world.  I may try it and see on one of these disconsolate days.

Maybe I should just write more of the Bildungsroman.  I should, but I don't have it in me today.  Yesterday's sickness has worn me out, and as I say, I'm still not quite well.

The day is cold and crisp and beautiful.  I should get out with cameras today.  This light is magical and it won't last forever.

Not even love nor sadness.