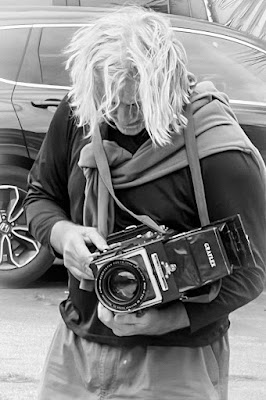 Two monsters, one photograph.  That's the beast holding the Big Ass Liberator camera.  I took it on my pub crawl, but even friends didn't much want to stand for portraits.  I shot two.  Now, of course, they are asking, "When do we get to see the pictures?"

I need to shoot two more images to make four so that I have a full tank for developing.  That's right.  I develop four images at a time.  Tell me that is not a silly idea.  That camera takes a lot of time.  And I am CERTAIN that the images will be out of focus.  I had to hurry.  Whatever, though. . . right?  It is stupid.  iPhones are soooo much easier and make grand photos.

Everyone says that this is quintessentially me.  Surely.  Hideous, confused, tortured.

The camera, I mean.

Did you see the report that the Pfizer booster caused strokes in quite a few people over 65?  I've been hearing anti-vaxers say this for a very long time.  Even a friend who is an oral surgeon said he knew a guy.  And my gymroid buddy, Tennessee, told me weeks ago that his mother in law, who was thin, active, and super healthy, had a stroke a week after having the vaccine.  I poo-pooed them all, of course, as making these claims based on nothing scientific.  My republican buddy, too, has been making these claims.

"Really?  Show me the evidence."

But that's the beauty of science.  Things are true until you can show that they are not.  That is the difference between science and religion.

Now the CDC is saying people should still get vaccinated.  I'm saying that they won't be able to put this Genie back into the bottle.

I'm becoming less enamored of both science and nature of late.  They seemed to have turned against me.  In each case, however, I believe the culprit is business.  Money and profit.  I don't trust anything where those two are concerns.  Why are these not the focus of religious instruction?  It is as if everything is Scientology.

I've learned of late that both nature and science share the same ideas and concepts.  I will not live forever.  It is only because I am poor.  The rich will be able to afford the best medicine has to offer.  I read another report that scientists have reversed aging in mice.  Completely.  I read the article, but even with my zoology degree, I understood nothing.  Such a thing will not be coming to the underclass like me, I am certain.  I suspect that the Chinese are far ahead of the rest of the world in this technology, but only Xi Jinping and a few others are going to get the treatment.  If the U.S. had this ready, surely they would give it to Biden McGoo.  An activator for his brain if nothing else.

Apparently, Pamela Anderson got hold of this shit.  If it were widely available, though, you would be able to buy it  on the Goop site.

As I have said, I am enamored of the Bourgeois Bohemians.  I especially like the women who have made their own fortunes.

They also like weekend mimosas and big Sunday brunches.

Yes, the parallels between Quasimodo and I run deep.  Neither love nor science nor nature will save us. And yet. . . our love runs deep. 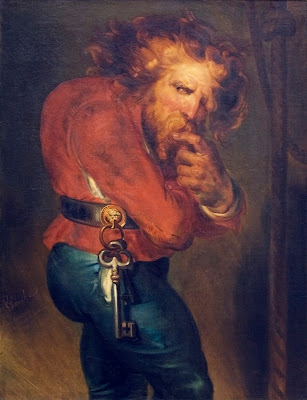 I have some terrible malady.  It is in my gut.  Maybe I picked up a bug in one of the hundred bars and pubs I have visited in the past days, but it could be my terrible diet, too.  I have been eating nothing but junk all week, part of the not drinking thing, I guess.  But all I ate yesterday was a bowl of Grape Nuts in the morning and three frozen fruit bars last night.  I took lots of meds before bed, some for my gut, some for the pain in my knee, and some simply to knock me out.

I'm certain, however,  that even in my heavily medicated sleep I was calling out for Esmeralda.