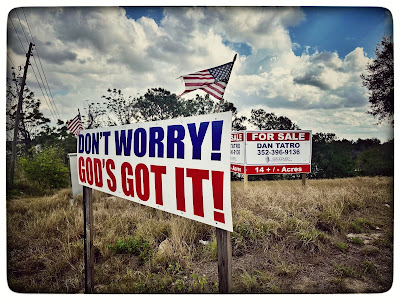 I got out of the house yesterday.  I loaded up my 4x5 camera, lenses, tripod, and accoutrements and drove north up a long, often congested highway to the land time forgot.  But it's changing.  As is the case everywhere in my own home state, realtors are having their way.  Roads are built so they can develop the land putting up big ranch style housing projects of dubious quality with large yards and those big walls and gates that are supposed to suggest an exclusivity.  Then, just down the road, after the majority of the properties are sold, the humongous apartment complex goes up.  Orange groves go down and the largest, scariest warehouses are built.  All of this, of course, made possible by our tax dollars that fund the construction of those roads.

There is no stopping money.  At all.  Money will have its way.  So it is written.

But the transformation isn't complete.  Not yet.  These hillbillies and crackers who have lived here since time immemorium still people the older places.  Going there is like a trip to "The Day of the Hillbilly Dead."  There is more of the past in the people than in the land.  Just a jaunt out of the big city and you see people in clothes by the pound and hair done at the beauty salon by gals with names like Rita and Marge. 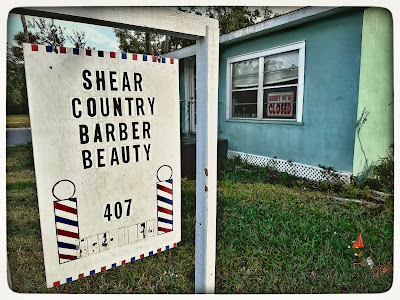 I drove through the afternoon passing places I thought I should photograph, but the traffic was bad and I would have had to turn around and I wanted to get to the furthest point of my trip, so for a long time, I just kept moving.

I hadn't stopped to take a photograph all day.  I was feeling pretty incompetent.  Needing gas, however, I pulled into a 7-11.  After filling up, I thought I had better pee.  God knows, I pondered, what I might find inside.  What I did find was a store full of people in 7-11 shirts milling about, slack jawed and slow.  When I came out of the bathroom, they were talking among themselves.  Casual conversation.  I decided to get a snack.  From what I could make out, the woman behind the register was going to get a ride home from another woman who had just asked the cashier to make her two pizzas.  It seemed she was going to eat one and take the other one home to the family.

Still, she said, two pizzas.  I gazed upon the shiny, wrinkled hot dogs twirling on the gleaming electric open rotisserie.  The mustard, ketchup, and sweet pickles sat on the counter beside them in open dishes.  A selection of donuts sat under a clear, plastic lid.  I took a pass.

The men wandered about aimlessly.  Nobody seemed to notice me.  It seemed that other than the cashier, everyone was just hanging around the work place with nowhere else to go.  Fuck it, I thought. . . when in Rome. . . . 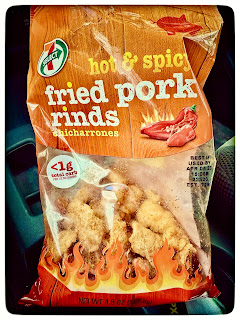 I took my rinds back to the car and decided to cross the road to photograph a gathering of signs. 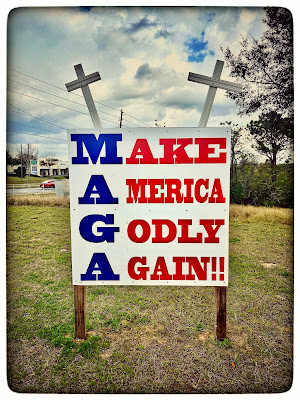 Nice signs, really.  Somebody had done a good job.  I needed to be careful, though.  People in their trucks didn't look as if they they liked me taking photos here with my iPhone.  God knows what might happen if I took out the 4x5 and set up a tripod.  In the past, I've had people throw things out the window at me  they drove by.  I've had trucks pull up and fellows ask me what I was doing.  Maybe it's just me.  I never hear stories like this from others.  But, with a gimp leg on which I was having much trouble walking and my long, blond hair, I kind of stood out.  I decided I needed a driver.  At every stop, I would turn my car to face the escape route and get out leaving the engine running.  I would have felt much better if I had somebody behind the wheel ready to bolt as I leaped into the passenger's seat.

As the afternoon grew late, I made more frequent stops, but I never took out the big cameras.  I remembered that I had some medium format cameras in the car that needed a few more clicks to finish the rolls, so occasionally I would grab one of them.  I saw no reason to shoot with digital cameras, though. I have gotten addicted to the phone camera.  I can shoot and process an image in seconds.  I have printed some of my phone images large, and by God, they are fine.  Two of them are now framed and hanging on the walls of friends.  Crazy.  But, I think, these camera pics are the new Polaroid. 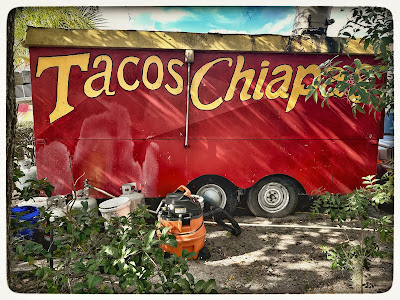 There is more to the trip, many more pictures, and though I'm anxious to show them all, I will save the rest for the second part of this narrative without end.  And I will skip ahead, leaving the middle part of the trip for later.

Driving back, I called my mother with whom I was to have supper.  I'd be over at five, I said.  O.K.  When I got back to town, I had too few minutes to spare, but I needed a shower to wash off the grit that had settled on me.  I got to my mother's a bit after five.  My mother and cousin were just mucking about.  They were in no hurry.  It would be awhile before a dinner of microwaved potatoes and George Forman grilled slices of pork loin, so I turned the t.v. on to watch the end of the Bengals and the Bills.  You may wonder at this, at me, after all my declarations, watching the NFL playoffs.  Well. . . you know. . . it's only a few games.

My cousin, being from Ohio, my root culture was, of course, pulling for the Bengals.  Only after they had won was dinner served and in that particularly hillbilly way, everyone scraping butter for their potatoes out of an almost empty tub, mismatched glasses of water, set beside plates, the table clutter pushed aside.  You know. . . a heritage meal.  Respect the Community, yo.

I should be able to get along with those hillbillies and crackers in the hinterlands, but somehow, out on my own, it doesn't translate that well anymore.

I got home late.  The second half of the 49ers and Cowboys was starting.  My old college roommate texted.  We would watch the rest of the game together.  We are smart about football.  We know more than the coaches, our talents on display after every bad play.  We were pulling for those insouciant 49ers, of course, and when they played a Waylon Jennings song after a commercial for the Official Wine of the NFL (did I dream that?), I opined that they needed to balance this with a song by the Dead.

Earlier in the day, a fellow we had worked with from our inception at the factory had died we learned from a group text.  My buddy is not well and doesn't get out much any longer, so it was fun sharing a game as in days of old while we reminisced about our colleague.  No. . . I won't apologize for watching the NFL playoffs.  Not for all my bitching and complaining.

The sun is not yet up, but the world is visible in shades of gray.  What will I do today?  There is so much I need that needs doing, yard work, maintenance, taxes. . . but I grow ever lazier.  I decided to shovel up the dead possum, though, and put it in the garbage, so there is that accomplishment in the bag.

Maybe I'll just spend the day resting on my laurels.  There is only so much a fellow can do.