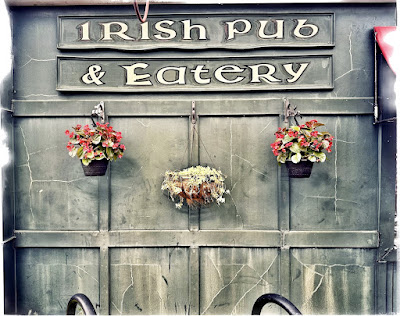 The house is slow to warm this morning.  It is cold outside and my old wooden house is certainly not airtight.  How can it be that the cold air is rising through the wooden floors?  Cold air doesn't rise, it sinks.

There is so much that I don't know.

What I do know is Holy Smokes--phone cams rock!  They are the best point and shoot cameras you can get, especially with a few quick and easy apps that you can't get on your expensive camera or even on your computer.  This era will be remembered by pictures taken with telephones!

I went on part of the pub crawl with the kids from the factory yesterday.  They began at eleven at a bar in the Factory Town, and ended up back there at eight.  They took the MetroRail system and stopped at all the bars along the line.  It was a Moveable Feast with an alternating cast, but there was a core group who saw the whole thing through.  I'm guessing that for a couple of them, the party was only getting started at eight.

I caught hell all along the way, of course, for sticking with Dry January.  I had several very big cranberry and sodas and a mocktail of some sort, too.  I was a hydrated partier, but I dropped out at five after my replacement at the factory arrived.  I mean. . . you can't have two cocks in the barnyard, now, can you?  Not being into fowl, I don't really know.  My zoology degree didn't touch on barnyard animals.

Many tales told and jokes later, I was home.  It was just getting dark.  After two days of frolicking with folk, I was exhausted.  And yet. . . the house seemed suddenly vacuous and empty.  My New Old Friend has been adamant about me getting out and living again, but for all of it, I am a very private man.  Not in my telling of things, of course, but in my living.  I like a little social life, but I am always "on," always performing, for in truth, I am a terrible introvert.  This stage self was the result of my life in the "theater," but it was something I had to learn.  I am naturally what used to be referred to as a "wallflower."

I'd rather spend evenings alone with My Own True Love.

The crowd I was with yesterday, it just occurred to me, was 95% child free.  Only my replacement and his wife have children.  That fact remains invisible to me much of the time as most of my friends are or seem to be child free.  It is one of those faux-natural things, I guess, sort of the way that drug addicts are drawn to one another, though the comparison does not seem apropos.  Maybe we are all just single-mindedly selfish.

At home, I prepared dinner for one.  A little t.v. and I was in bed, once again, just after nine.  That's the kind of party boy I am.

Oh--I did take my Big Ass Liberator camera with me, and I got part of the group to stand for two pictures. I was in a hurry, or rather, they were, so I am pretty certain that the exposures and focus will be off.  They were popping off pictures with their phones all day long, though, then posting them on the group text for the envy of others who hadn't come.  They all know how to stand and smile like they are making prom pictures for the yearbook.  I don't have that ability, obvious in those photos, and always look like I'm suffering from some deforming and painful disease.  I guess that's why they never let me pay for anything.  Having known me for a long while, they still think I'm rough and tough.  Holy mackerel, though, I walked further yesterday than I have for a month.  Limped, I should say.  But you know, John Wayne and James Arness and James Garner all limped, but they played heroes, too, so I reckon I could have them fooled.

Now, an empty weekend. I have no plans.  I have been thinking about taking a drive out of town with a bunch of cameras, but it is cold and I have done that before.  Every place looks like every other place for miles and miles and miles, just a series of Walmarts and Targets and TGIFridays and other chain restaurants, 7-11s and Wawas and Dollar stores along highways that were built with tax payers money for developers who build giant stucco neighborhoods to sell to people moving here from the north.  The visual history of places is being destroyed.  If I want to see something other than this, I will have to drive through less desirable climes, I guess, places where tourists don't care to go.

Maybe I'll stick around the house and cook up some small photo project.  Or read.  I don't know.  This is where I miss drinking mimosas and cuddling.  But, I think, not so many do that.  Certainly not the gymroids, and not most married people I think, either.  Not even the child free crowd so much as far as I know.  Not so many romantics in the world in my experience.  There really aren't many people living in Dreamland, I guess.

Maybe I'll get dressed and go to breakfast.  I found an intimate little place I want to try.  I like intimate.  There will be no mimosas, though, not this month.

Nor emo music, either.  It was making me too sad rather than merely melancholy.  I have come down with a terrible aching longing.

But it could be worse.  I just fed the feral cat, and she looks pissed.

"Why are you mad at me?" I cooed.  But she was cold and wasn't having any of it.