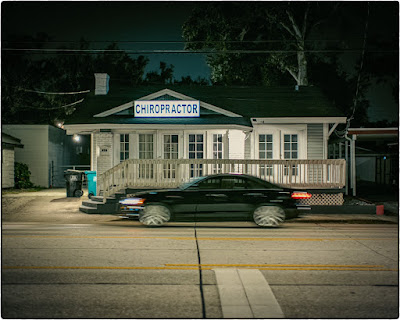 Those fellows from Boston were slick tricksters, they were.  They seemed to run on a special juice and always at the highest rpms.  I don't know what they did all day.  We only worked in the late afternoons and early evenings.

They loved to make bets.  Once, sitting at a red light on the main drag downtown, a road filled with stop lights, one of them said, "I'll bet you I can drive down this street without hitting a single red light."  Now we thought he was going to punch his hot rod and try to speed his way through them.  Nope.  He just dawdled the whole way, never stopping, but never catching a light, either.  Another time he bet me I couldn't jump over a card he would place on the floor.  I figured that he would try to prevent me, but he said no, that he would stand ten feet back.  I took the bet.  He put the card in a corner.

One day, one of them got a bright idea.  We worked out of an office in a building downtown.  Every day we walked through long hallways past wooden doors and frosted glass windows housing offices of every sort.  Next door to ours was an attorney.  The letters on his door announced, "Richard Voss, Attorney at Law."  One afternoon, however, walking by his office door, one of the closers pointed as if astonished.  The letters had been rearranged to say, "Richard Vay, Rotten Ass."

When the shit hit the fan over that one, he apparently blamed it on us.  We were never allowed back into the building again.

After a couple of months, the closers were headed back to Boston.  They asked Tommy, Steve, and the other kid from the trailer park, Donnie, if they wanted to go back with them and work.  They didn't ask me.  I never sold that many magazine subscriptions.  Where the others might get four or five closings a night, I usually felt good if I got two.  One of my last deals was to sell my parents.  For the next couple years, we got Life and Look magazines ever week.

When they closed up shop, Tommy and Donnie left with them, but that didn't last long.  By the end of the month, they were back.

Emily kept writing, but the frequency of letters was diminishing greatly.  She still loved me, but she had made friends.  She wrote me about their adventures.  There were boys, but I shouldn't worry, she said, because she only loved me.  There were no more phone calls since she had been caught charging them to other people's telephone numbers.  Her parents had to pay an enormous bill.

School dragged on, but that year was marked by frequent bomb threats.  Every week or so, someone would call in and say there was a bomb in the school and we would all have to leave until the police had searched for it.  Some days, they simply sent us home.  It was quite the trick.

One day, I was walking home with one of Wayne's old girlfriends.  She was pretty-ish, but rough.  She lived alone with her divorced mother and, according to Wayne, "put out."  It began to rain and her house was not far from the school, so we ran there for shelter.

"You want to come in?" she asked.  Her mother was at work.  We had the house to ourselves.  I don't know how it happened, but we were soon lying on her bed, kissing.  I had no idea what I was doing, really, but Wayne said she was fast and I was curious.  The house was silent.  I heard the ticking of a distant clock, the creaking of the bed, but everything seemed to be coming from far away.  I was disembodied.  The room was swirling.  She put my hand between her leg. I was scared and didn't know what to do.  A patch of gnarly hair.  A soft opening.  It was terrifying.  I wanted to go home.

"What was that?" I said, jumping up, listening intently.  "I think your mother is home."

She wasn't, of course, but the spell was broken.  The rain had stopped.

"I better go before your mom gets here," I said even though it was early afternoon.  I think she smirked as I beat it out the door.

Back in the open air, I was both embarrassed and relieved.  I just wanted to go home.  I wanted to watch t.v. and look at magazines.  I could feel God looking down on me.  I was a sinner.

The world, I thought, not for the first or last time, was a strange and dangerous place.  My teenage desires conflicted with everything I had been taught, all the pleas to be good and avoid temptation, love God, work hard. . . all of the scriptures.

More and more, I simply wanted to be alone.